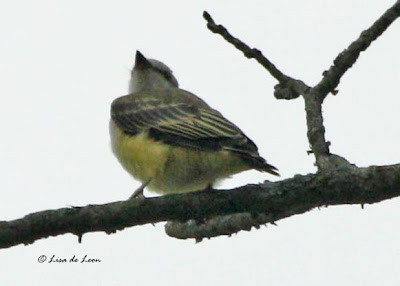 I still have several birds from Arkansas that have not yet been identified. This one was among them. I sent the picture to a local birder who confirmed my much researched decision. This is a Western Kingbird. I was hesitant to ID it because it is considered a rare bird for Arkansas. 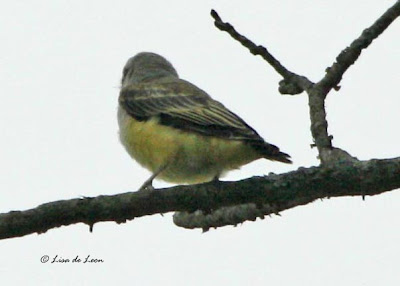 I found this bird in Eureka Springs which is in Northwest Arkansas. It was among many other different birds flitting among a grove of about 8 trees. There were so many birds and they were so high that most of my shots from this area are record shots only. It was in the same area where I photographed the Eastern Kingbird. 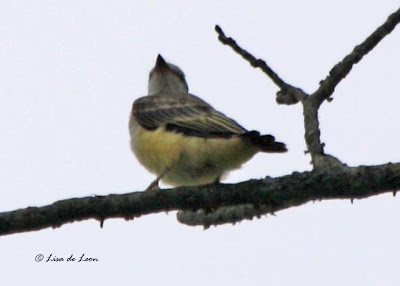 It is disappointing that I couldn't get a full head and eyes shot but I was lucky to get this. I was shooting straight up to about 40 to 50 feet. It was an overcast day and the outcome is what it is. 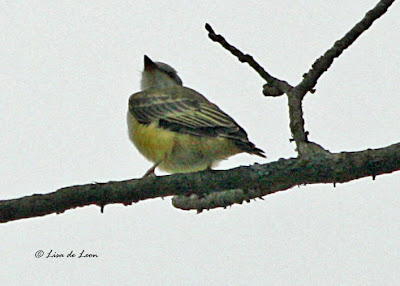 The Western Kingbird is a flycatcher that feeds on insects and berries. Apparently, it is quite an aggressive bird and often sings at night.

This one may be an immature bird given the short length of its tail. However, this is hard to tell because of the angle of the shot. If the opportunity arises, I will return to this area and get a cabin in the woods that will serve as a point of eating and sleeping. The rest of the time, I will be out in search of all of the grand birds in the area.
Posted by Lisa de Leon at 12:41 PM