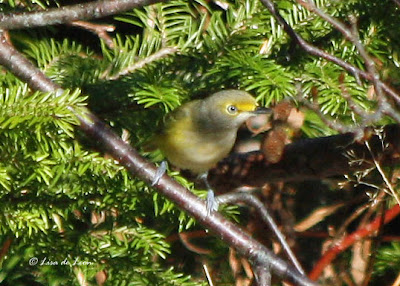 It was with a degree of sadness that I stored my lawn chairs, rain barrel and fountain away from my back yard on Friday. It is hard to say goodbye to summer. Then out of the blue, the weather surprised us all on Saturday and Sunday. The temp was in the high teens, the sun was shining and the wind was almost nil. On both days I made a point to get outdoors and do some walking.

I never think that I am going to find my next new bird when I go out. It is really all about enjoying whatever bird chooses 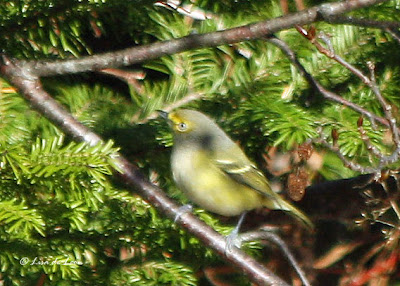 to show itself and breathing in the great fresh air.

Maybe that is what makes finding a new bird so special: Little expectation - great surprise.

My destination was Jones' Pond in Torbay, but I never miss an opportunity to scan the woods on my way.  Because of the construction on Torbay Road (nightmare), I decided to go through Bauline Line and Pouch Cove Line. 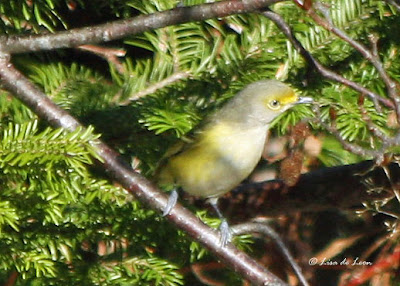 Once I turned on to Pouch Cove Line, I spotted an active feeder in the front yard of one of the houses. I stopped to have a look where I spotted my first new bird of the day. I will post that one tomorrow. I was already more than contented that I had a new bird to study and learn about. 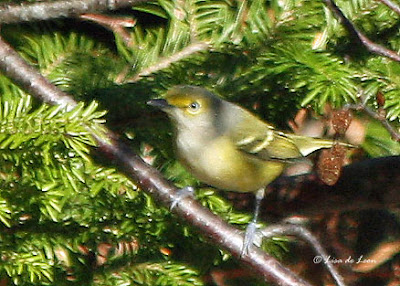 I drove further up the road where I came upon a flock of American Goldfinches. There were about 20 of them busily feeding near the road. I pulled off the road to watch and learn more about their habits.

While sitting in my car enjoying the show, I noticed a small, yellowish bird that was different. I was able to get one picture and look at it more closely. I was sure that it wasn't a Goldfinch, but I wasn't sure what it was. I knew that I had never seen a bird like this one before. 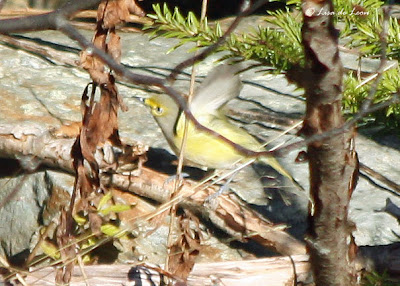 While looking at my picture, it disappeared off the branch. I scanned the whole area and spotted the bird flitting around, much lower in the greenery than the American Goldfinches that tend to stay higher in the trees. It was difficult to get a shot because there was so much brush between my lens and the little bird. I kept my camera trained on it and every time it showed itself, I took pictures. At the time I thought it might be a warbler. 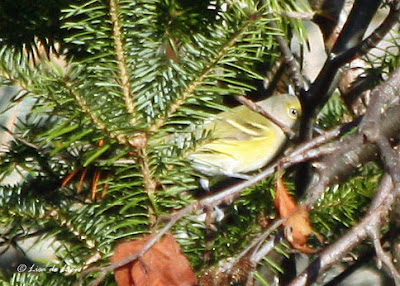 I remained locked on the movement of the little bird with the different colored eye as it played hide and seek with me. When I got a clear shot of its eye, I knew I had something different from a warbler. I had never seen any pictures of a warbler with a light colored eye. 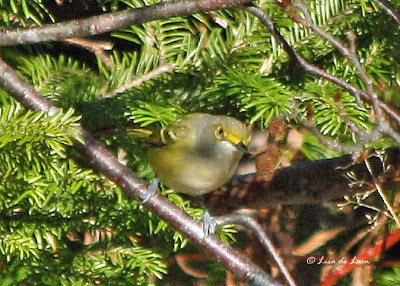 I stayed and watched until the little bird disappeared. Then I headed off to see if there might be any sea birds off Pouch Cove and Flatrock.  When I later returned home, I downloaded my pictures right away. I had a really hard time trying to identify this bird. Eventually, I remembered noticing several posting that mentioned "red-eyed" and "white-eyed" vireos. I began looking through pictures of vireos and there was my bird.
I have since learned that this is an extra rare bird in Newfoundland, never found in the area where I found this one and very rarely photographed because it tends to stay hidden away in the bushes. I got another rare bird! I wonder how many more there are out there....
Posted by Lisa de Leon at 7:24 AM