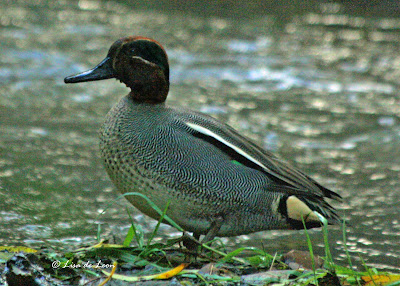 The Common Teal or Eurasian Teal, as it is sometimes called, is the "old world" counterpart of the Green-winged Teal of North America.

This Common Teal has been staying put at Kelly's Brook for quite some time. I have had pictures for a while, but I didn't post them because I was hoping to get better shots due to the availability of the bird. That is not going to happen. 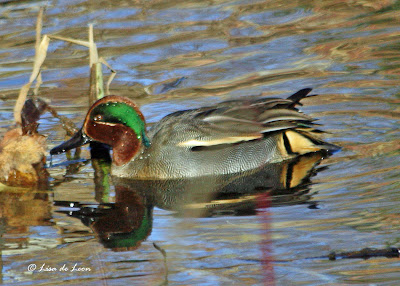 Photography conditions at Kelly's Brook leave a lot to be desired. There has been a lot of leaf cover, but that is disappearing. I thought that would help with getting a some sharp pictures. I thought wrong. There are so many little branches, twigs and water plant growth that it just seems impossible to get a good focus on this bird. We have had some sunshine for the last week, and I have tried to take advantage of that. So far, no great picture so I am posting anyway. 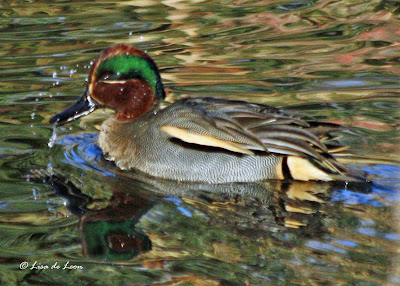 The Common Teal looks very much like the Green-winged Teal which I have pictured below. Yet, the light colored, distinctive streak of cream that runs along the wing sets the Common Teal apart. In all lighting conditions this whitish streak really stands out. 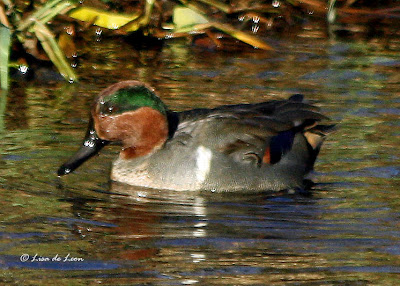 The Green-winged Teal, pictured here, does not have the white streak along the wing but rather has two white smudges on the upper side of both breast. Both of these teals are quite small. 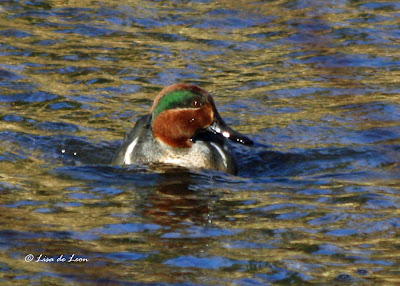 Note:  This is the same area where the Kentucky Warbler has been residing for about two weeks. I have now seen it twice but have yet to get a picture. I will keep trying.
Posted by Lisa de Leon at 4:55 PM