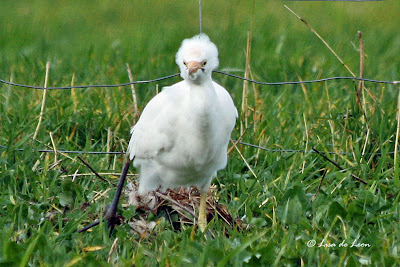 I hadn't been birding for several days now due to a number of other obligations. I would have liked to go on Saturday, but the wind and rain were real deterrents. Alas, Sunday arrived, dry with intermittent clouds and sun. That was good enough for me. However, it was a bit bothersome that we were under a wind warning. It was the wind that accounts for this little Cattle Egret's fashionable hairdo. 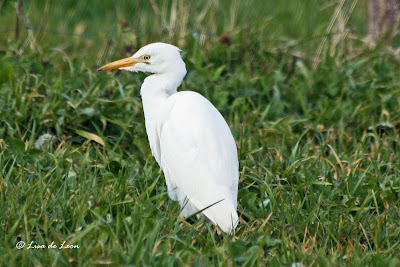 This Cattle Egret arrived in Bay Bulls on the Southern Shore about five or six days ago. I felt quite lucky that it was still there when I arrived at the farmer's field yesterday. It was showing signs of being quite at home among the sheep and the numerous on-lookers. 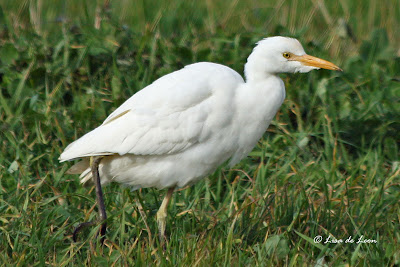 At one point yesterday morning, there were six bird watchers lined up to watch and enjoy this pasture visitor.  The owner of the land was very kind and invited us to do our viewing  from his driveway which was considerably closer to the bird. It showed no discomfort despite our close proximity. 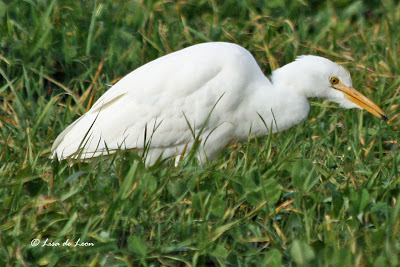 The Cattle Egret is a rare visitor to Newfoundland and often raises a stir when it arrives. Previous years' reports indicate that the Cattle Egret has most frequently landed in the Bay Bulls area. It raises the question about how or why this happens. I find it interesting that the field guide reports that this is an insect-eating bird, but in this field at this time, it seemed to be eating seeds. Unless, it was eating some beetle-like bug. 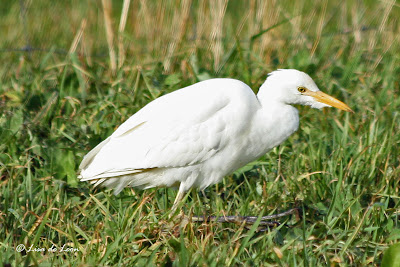 This is the third long-legged bird that has paid us a visit over the last month: First there was the Great Egret near Cape Spear, then there was the Sandhill Crane that dropped into Goulds for about a week and now this Cattle Egret with lesser long legs. Each one has brought a great deal of pleasure to birders and non-birders alike. I can hardly wait to see what may show up next. 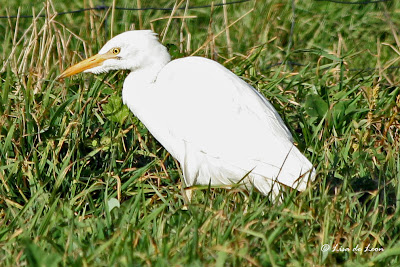 While on the Southern Shore, another birder and I decided to continue our trip into the other known bird-rich areas of the shore. Try as we did, we were unable to find anything else out of the ordinary. However, that never dampens the spirit of a birder because a lot of birding is really all about the hunt. Not to mention that we both added this Cattle Egret to our Life List yesterday. That is particularly special.
Posted by Lisa de Leon at 11:24 AM