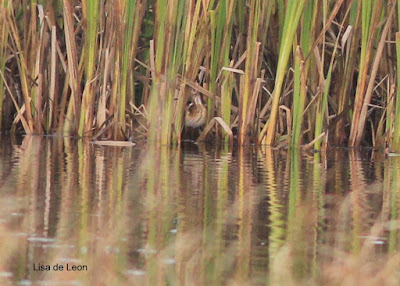 I was 30 minutes away when I got word Allison Mews had spotted a Least Bittern at Virginia Lake. Wow! I was just there earlier in the morning to see the Pied-billed Grebe. However, the down pour of rain drove me to my car. There will be much said about this bird over the days to come, I am sure. I will leave it to the "old guard" to say just how rare this bird is. I should say, though, getting this poor photo was a fluke. 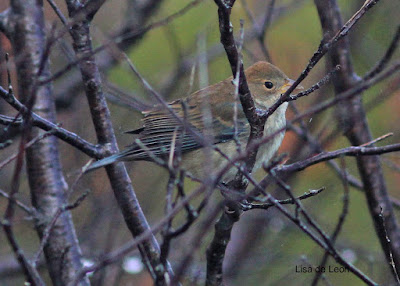 While standing with other birders, Bruce Mactavish shouted, "It's out." All the scope users locked their eyes on to the scope. Unsure exactly where  the bird was, I raised my camera and shot in the general direction hoping to see it though my camera. I didn't see it then, but did catch a bit of it in the reeds (center of photo.) Fortunately, I was able to see it properly though a scope, and it is a beautiful bird. 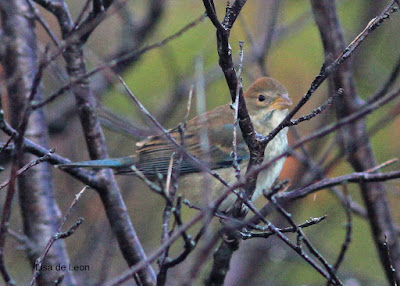 Now, where was I when I got the call? I was in Blackhead looking at Indigo Buntings. At the time, I thought I had seen only one bunting, but thanks to my trusty camera, I was able to see quite a difference in the color of the two birds. 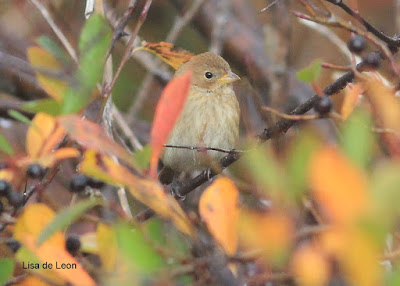 It was the bird in the darker image I saw first and for a very brief time. Then, the buffy colored bunting popped out. That was the bird that I expected at this time showing only a tinge of blue. 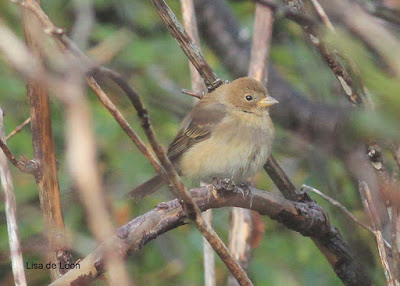 I included images of both birds to show just how much their plumage can differ at this time. 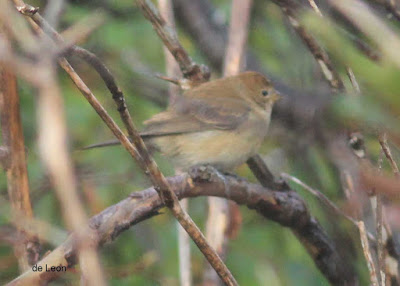 The first bird shows with a lot of the "breeding blue" remaining. It is clearly a male. The second, however, has only a faint hint of blue. This may be a female bird or an immature. I just don't know enough about them to be able to tell the difference.

What was interesting was the high number of birds in the area. In recent days, things have been very quiet, but even with the mix of rain and sun, birds were moving about.
Posted by Lisa de Leon at 6:12 AM