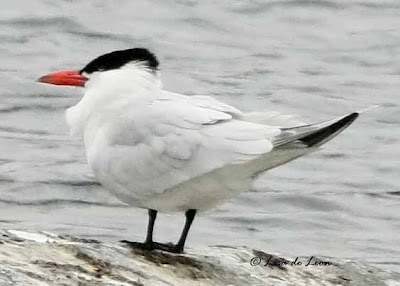 When my phone rings before 9 a.m. it is almost always a good news bird report. Such was the case this morning. I had just settled down at my computer with my first cup of coffee when I heard the familiar ring of my cell phone.

Anticipating a bird report, I rushed to the phone right a way. Just as I thought, there was news of a new bird in town. The network of birders through phone calls and the discussion group makes it so easy for birders to get their first glimpse of a new bird. 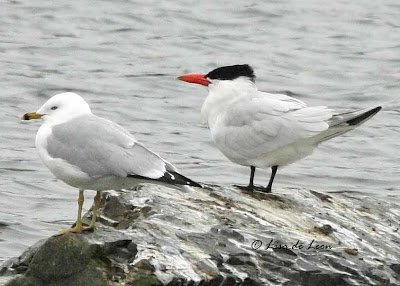 This morning the report was of two Caspian Terns freshly arrived at Forest Pond in Goulds. This was a first for me. Last year I frequently saw the Common Tern and strained trying to turn one or two into a Caspian but that never happened. Today, I saw the real thing.  What makes this northern seabird special?  Well, it doesn't often make it to St. John's. It has been reported frequently in Central around the Gander Bay area and West around Stephenville. So, having a visit so close by was a rare treat. 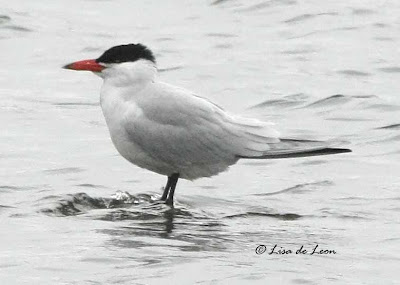 I included a picture of the Caspian Tern with a Ring-billed Gull for size comparison. The Caspian Tern is much larger than the Common.  Word has it that this bird is very aggressive with humans when they are nesting. They have been known to attack. Around noon, I received another call from another birder who was looking at the Caspians who told me there were now three, not two. Maybe we are on the way to a "ternery."

These shots are major crops as the birds were a safe distance from shore. I stayed in the car because I didn't know if they would be flighty. This precaution not only helps the bird but helps birders to be able to get a good look before the birds move on.

My life list and 2011 list are steadily growing.  Other special moments today included sighting a Fox Sparrow that flew in front of my car on Blackhead Road, a Mourning Dove and a Downy Woodpecker. These are birds that are not particularly rare but I don't see them every day.
Posted by Lisa de Leon at 8:06 PM