Portrait of a Red-breasted Nuthatch 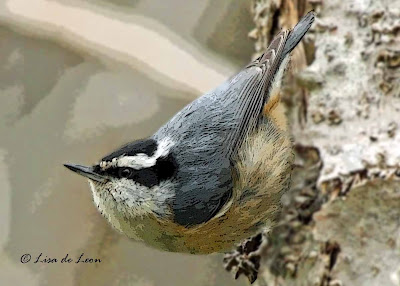 The Red-breasted Nuthatch is a feisty year-round resident of Newfoundland. It is not nearly as common as Dark-eyed Juncos or Black-capped Chickadees but they are often seen in similar locations and among these birds. 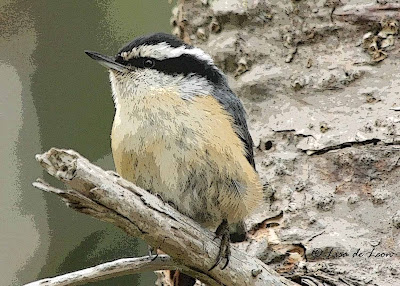 This smart-looking little bird can easily entertain on-lookers for quite some time. They flit in an out to pick up sunflower seed, pick at suet or sort out their favorite seed from a mixed bag. They are often seen hanging upside down or working their way down a tree. 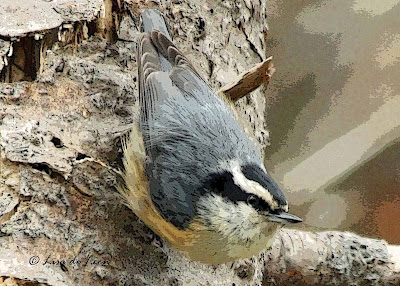 They move around with the speed of lightening, zooming in and out in a flash. Yet, they will pause for just a moment to grab the food or will linger on a tree trunk for longer periods of time extracting insects from the bark. This means that birdwatchers and photographers can easily study and document their habits. 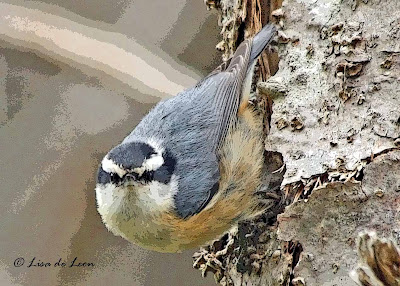 The RB Nuthatch has some interesting habits. First, like woodpeckers it is one of the few birds that will hollow out a hole in a dead tree for nesting. I was recently shown one such project in progress. Second, they will line the hole with resin both inside and out in an attempt to keep unwanted visitors out.  Third, they will store food in the bark of trees for later consumption during leaner times. 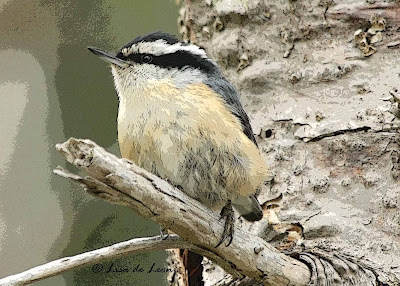 I have had two Red-breasted Nuthatches visit my back-yard feeder on a fairly regular basis. There is something very special about this bird that makes me stop and watch every time it drops in. Yet, don't let is diminutive size fool you.  This small little bird can be quite aggressive and will make sure that it gets its share of whatever is being offered.  Everyone should have at least one resident RB Nuthatch in their yard!
Posted by Lisa de Leon at 9:38 AM