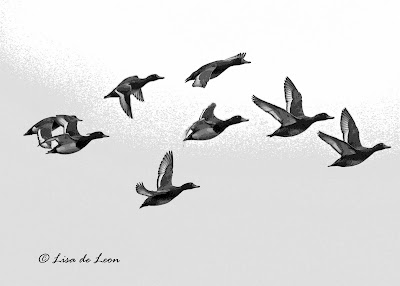 In Newfoundland when we hear the term "out migration," we do not typically think of birds leaving. More likely, we  conjure up visions of young people packing their cars with their worldly possessions and heading West in search of work.  Fortunately, this kind of outflow has ebbed somewhat and we are now speaking of "in migration" as more people are returning to this province. Needless to say, this is good news. 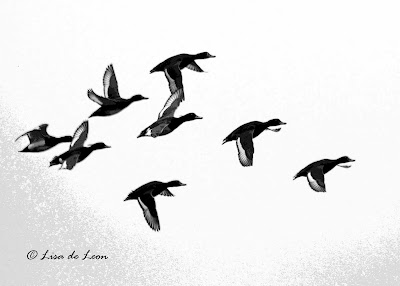 Among birders at this time of the year it is the "in-migration" of small song birds that is mostly on our minds. Yet, there are birds that have wintered here that also are jumping on the out-migration train and leaving us. Among these are the Black-tailed Gull and other special gulls. 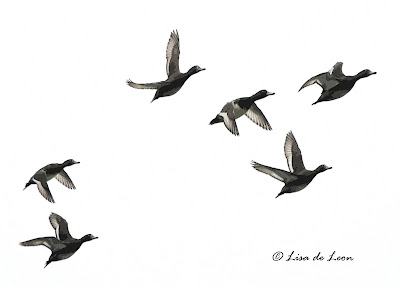 Far from being an expert in the area of migration, I think that this group of diving ducks has just left us.  On Friday the 13th I took a walk around Kent Pond and took a quick head count of all of the diving ducks on the water. I came up with 14. I continued my walk enjoying the outdoors and the infrequent song of robins and the Yellow-rumped Warbler. 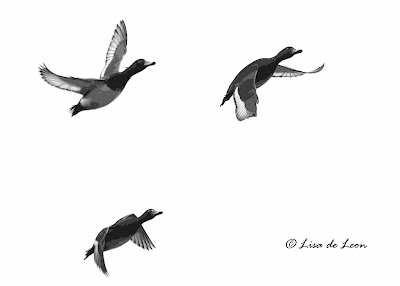 As I came to the end of the East end of the pond, I noticed about half of the diving ducks lift off the water altogether. They flew towards me and then looped back and flew the length of the pond and headed toward me again. On their second approach the remaining diving ducks lifted off and followed behind. They were all heading straight toward me. I felt somewhat like the queen enjoying a Snowbird flyby. It was amazing to see them in flight so close to me. Fortunately, I was quick to document the event and then I stood and watched as they flew off in the distance. It was quite a special event. I have walked the pond every day since and there is not a single diving duck left on the pond. Was this the actual time and date of their out-migration? I really think it was, and I felt very lucky to have been there to witness it.
Posted by Lisa de Leon at 7:52 PM