A year ago I wouldn't have had an idea what a rare bird sighting was. I really didn't know that so many beautiful and exotic birds make it to Newfoundland on a wing and a prayer, driven by high winds from Europe, Asia, and all points south of us.  How do you know if it is a rare bird or not? Ask the birders in the community and the answer is sure to come with the documented dates of previous sightings (when and where) and a story about how it unfolded.  In my searches across the WWW, I came across the Avibase - Bird Checklists of the World - http://avibase.bsc-eoc.org/checklist.jsp?region=canl&list=howardmoore and found a checklist that was reportedly last reviewed in August 2009. I can't attest to its accuracy, but it is a handy tool.

Avibase reports that there are 387 species reported in Newfoundland. For sure that is out of date because the list doesn't include the Slaty-backed Gull that was sighted last year and this year. It also provides info on the species introduced to the province, the threatened species as well as rare and accidental species. In 99% of the cases I was able to see the rare species because of the postings on the NL Birds Discussion Group. This has been one of the most effective and most used resources for this province's birdwatchers.

Each of these birds and each of these pictures has a story. The first shot of the European Golden Plover clearly reminds me of how I got my car stuck so deep in quagmire that I could only see the top half of my tire. It also reminds me of the kindness of Nevin who worked so hard to get me out.  The Cattle Egret in the second shot was viewed in Bay Bulls with several other birders. The Great Egret, first located by Anne Hughes, created a traffic snarl on the Cape Spear Road. 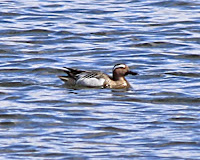 This grand Sandhill Crane showed up in Goulds and attracted numerous spectators. The Northern Lapwing caused many birders to get in their cars and drive to Portugal Cove South just to get a look. I was lucky to find TWO together. The day that the Garganey was reported to be at Mundy Pond, the raw wind and the temperature was a trial to any birder hoping to get a glimpse. The Garganey didn't stay around very long. It is because of the potential for a bird to leave as quickly as it came that I try to brave the conditions and get a good look.

It is funny how some birds will linger and others just pop in for a rest. The Hooded Merganser stayed around four about two weeks and showed very nicely while the Redhead was a "now you see it; now you don't" bird. I was the lucky one that first spotted this bird and documented its visit with a photo. 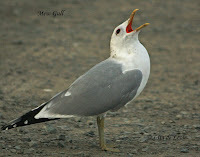 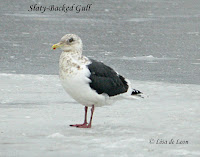 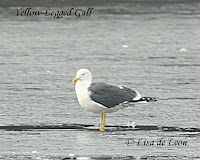 Newfoundland may well be the rare gull capital of the world. So many rare species find their way here including the Mew Gull, the Laughing Gull, the Bonaparte's Gull, the Slaty-backed Gull, the Yellow-legged Gull, the very rare Black-tailed Gull (only two documented and one of them is here now), all pictured above. 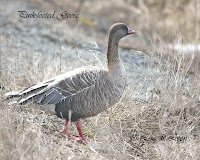 There was a tall stand of Pine Trees in Goulds that for some reason attracted a slew of rare birds in the spring. Among them were the Scarlet Tanager and the Eastern Wood Phoebe.  I missed seeing the Northern Parula that was spotted on the lawn in this yard. This Pink-footed Goose showed up in the Spring in the Gould's Access Road Pond. It stayed for quite a while and really caused a traffic jam, as there was hardly any place to park for viewing.

It was on a seldom-birded stretch of road with a flock of American Goldfinch that I found this White-eyed Vireo. Apparently, this is a very rare photo since they are very secretive birds. This one was clearly feeling very safe.
I was lucky to see some other rare and accidental birds during the year but was unable to get pictures. These included the Sooty Shearwater, the Kentucky Warbler, and the Gadwall. Note: Omitted here is the White-winged Dove that I posted recently. It is still frequenting the yards in Quidi Vidi.

Other birders have traveled frequently and far to see other rare birds throughout the year. Seeing is believing and everyone wants to see for themselves. In the year to come I will expand my search for the rare birds and the regular visitors, and it goes without saying, I will surely learn a lot. I have pictured 18 rare species and mentioned five others. I'm sure that other birders have amassed an even greater collection of pictures than I have shared here. I wonder what 2011 will bring. I will surely be out there looking.
Posted by Lisa de Leon at 10:16 AM