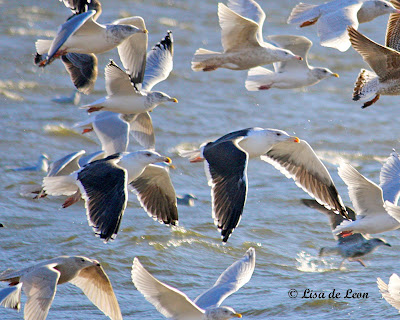 The Great Black-Backed Gull is easy to spot among the masses of gulls that group together. It is distinct with its very dark mantle and wings and its size. The GBBG is the largest gull that frequents Newfoundland. 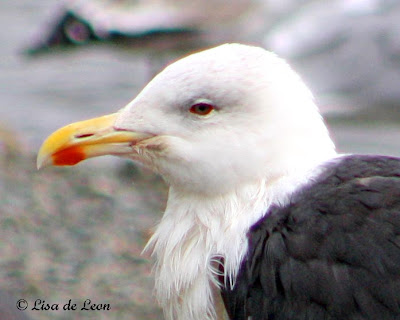 This GBBG seems to have gotten into some type of goo. It shows a little around its chest area but its underneath was totally matted. This image provides a good close-up of the mature GBBG's large beak, with a lone red mark on the lower mandible. Note the eye is yellow circled by a red eye ring. 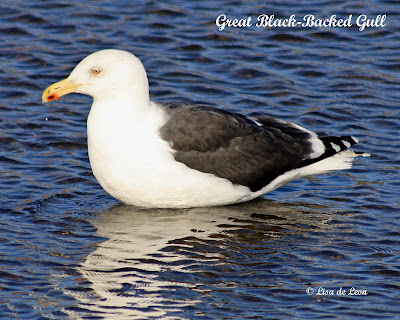 The Great Black-Backed Gull is a four-year gull. In its early stages, it is brown, similar to the immature Herring Gull but should be larger than the Herrings. As I review my images to the GBBG, I realized that I don't have any really good shots. I think that is typical when a bird is fairly common, I forget to collect the stock shots. 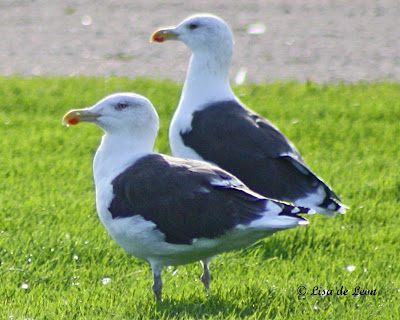 This makes a total of nine posts made here on the gulls of Newfoundland. I have one last gull to profile - the Glaucous Gull. I saved it for last because I still am confused about the identification of the Glaucous but will study it before the post.

Once all of the gulls of 2010 have been profiled, I will post the heads of each to see if you can identify all of them correctly.

What's up with this cold, wet weather we have had this week and forecast for the next 10 days? It has been a real deterrent to going birding! However, the nice thing about adding photography to the birding experience is that I have thousands of pictures to work on.

On Monday of this week, we had the last blast of sunshine. I used that day, the whole day, to rake and weed my front yard. Countering the 54 km winds, I used a lot of energy just keeping my balance. This is the year that I am going to work to create a more bird-friendly yard so I wanted to get a good jump on the process before the weeds took control. All of this rain will be very good for the grass.

I checked with the hardware store about a rain barrel for the summer. I certainly don't want to get caught up in a draught this summer and not be able to water my trees and shrubs. The barrels are expected in by the end of April.
Posted by Lisa de Leon at 12:16 PM