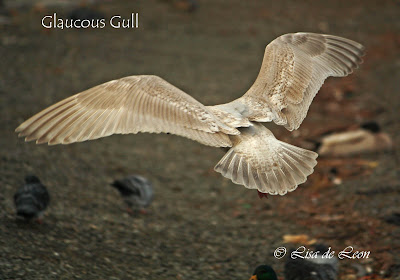 This is my favorite shot of the Glaucous Gull, the last gull that I am learning to identify. It has been challenging because of the multi-year transformations. Many of the gulls are 4-year gulls and go through a series of changes that include their feather colors, beak and eye colors. There is enough to learn to fill up a whole year with just gull IDs. Dave Brown conducts gull identification workshops. His sessions include lectures and photos and a field trip to meet the gulls face-to-face. 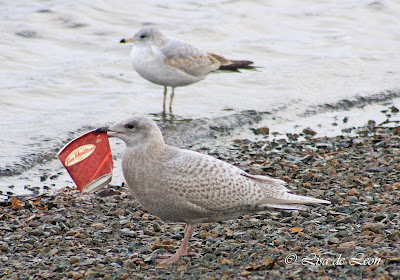 Both of these gulls are Glaucous. The one in the background is more immature. It has dark wing feathers that will fade during its many changes. The gull in the foreground is older. Note the flesh color on the beak with a dark tip. This is typical of all ages of the Glaucous until it reaches full maturity. I thought this picture was particularly representative of a Glaucous as they are known to be scavengers. This one must be Canadian born!


The Glaucous Gull is almost as big as the Great Black-Backed Gull. It is stocky with its wings hardly as long as its tail. By the fourth year, the buff color of the Glaucous develops into a full grey mantle with no brown or black. Its beak becomes yellow with a red spot on the lower mandible. The eye that was brown in its youth becomes yellow with a yellow eye ring. It legs are a pale pink, much lighter than the pink legs of the Iceland Gull. 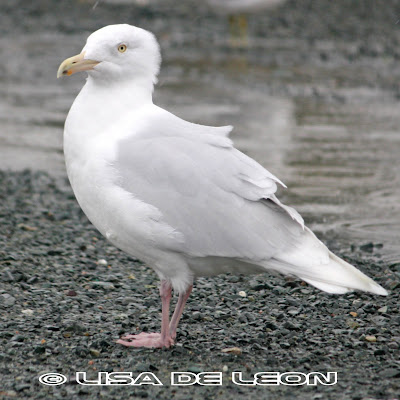 I continue to study this gull and work to distinguish is from the immature Iceland and Herring gulls.
Posted by Lisa de Leon at 7:49 PM