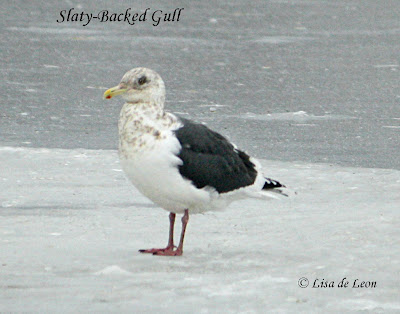 The Slaty-Backed Gull is an uncommon bird in Newfoundland, although there have been a number of documented visits. This special bird was first spotted in October in the ball field on the south side of Quidi Vidi Lake. Before the lake froze, it was spotted in fields, in the harbour and in the dump. Every sighting was posted on the discussion group, prompting birders to rush to the area in hopes of getting a glimpse and a snapshot of the Slaty-Backed Gull.


This gull is most often seen in Northeast Asia. It has been a great attraction for birders who visit Japan. Sources say that it comes from as far away as Siberia. It is not easy for a new birder to identify this species. Its mantle is a slate grey and it has a white wing tip on the back. Its legs are much darker pink than the Greater-Black Backed Gull. It is also smaller than the GBBG. Its beak is not as large as a GBBG, but it does have the red dot on the lower bill. 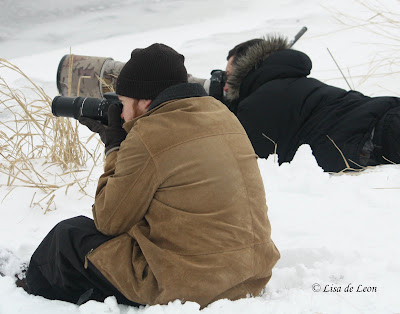 On one of those very cold days in January, I darted down to QV Lake to see if I could spot the SBG. When I arrived, Brandon Holden who was visiting from Ontario for two months of birding, was there. He was braving the cold, and I sat in my car. All of a sudden he waved at me to come out. The Slaty-Backed Gull had arrived. Just as I was getting out of the car to get set up, another birder arrived. I alerted him to hurry, quietly.


In no time these two photographers were in place and firing away at the SBG. They were as picture-worthy as the gull. 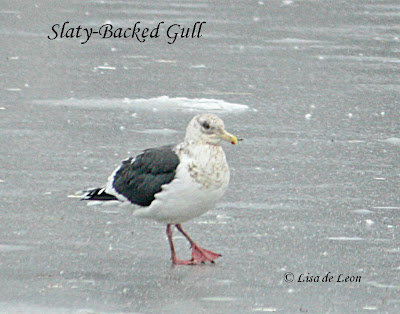 I zoomed as far as my camera would allow and got some decent record shots of this Asian visitor. I was shooting with a 250 mm lens while Brandon was shooting away with his 600 mm lens. His shots turned out great! 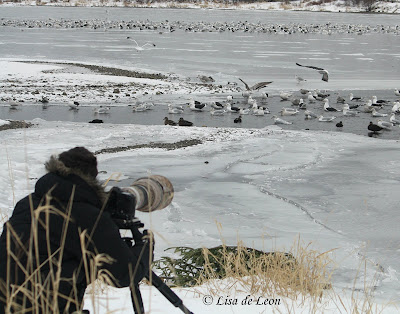 He was enjoying it so much that I took another shot of him alone. I sent him the image to share with his family. He was posting on his web site everyday, and I thought his family might like to see him at work. He posted the shot on his web page and was very appreciative. Much to my surprise, I was browsing web sites today and what should I find? My picture posted on the Illinois Bird Forum with no credit given! I quickly submitted my request to be credited with the shot. We'll see how that turns out. 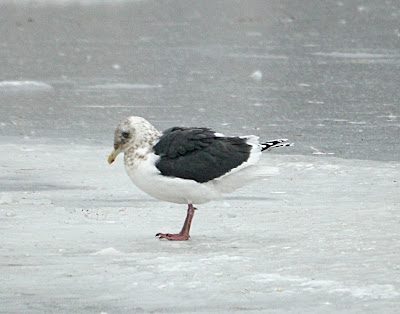 Later on that day, I met a teacher from Ontario who had her scope set up to view the Slaty-Backed Gull. I learned that she had taken her 4-day long weekend to take a jaunt to St. John's specifically to view the Slaty-Backed Gull and the Yellow-Legged Gull. Her family wondered about her normality having chosen to spend her break standing out in the cold and wind on the shores of Quidi Vidi Lake. She seemed perfectly normal, just bitten by the bird watcher's bug.

I have recently encountered people from Ontario, Manitoba, and Texas who have travelled to St. John's for the express purpose of birdwatching. This is a unique setting that will see birds stop over here and nowhere else in North America. It is clear that there is great potential for this city and province to attract birdwatchers to the area. Tourism capitalizes on the bird eco-reserves surrounding Newfoundland and Labrador, but there is little mention of the other great feathered rarities that visit our island.
Posted by Lisa de Leon at 4:01 PM