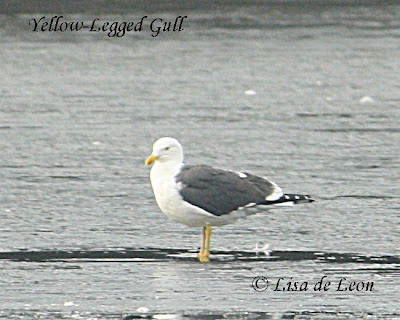 Today's post is all about the bird and the experience, not the pictures. In January, the buzz went out that a Yellow-Legged Gull had been spotted in the harbour in St. John's. Birders everywhere were rushing to the scene. Then, it was reported that the gull had been seen at Quidi Vidi Lake. All the birders rushed to QV and lined off the banks with their cameras and scopes. 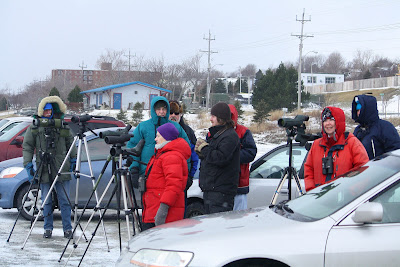 This shot was taken on January 30th, a cold Sunday afternoon. Within an hour there were twice as many spotters. All were shivering in their boots hoping to get a glimpse of the Yellow-Legged Gull. It did not disappoint. It showed up on cue. Thanks to Anne Hughes, I got a brief glimpse of the bird through her scope . It was brief and fleeting. First, the gull sat down, hiding its yellow legs. Then other not-so-special gulls got in front of it and blocked the view. Despite the cold, I planned to wait it out to get a better look and maybe even a picture. 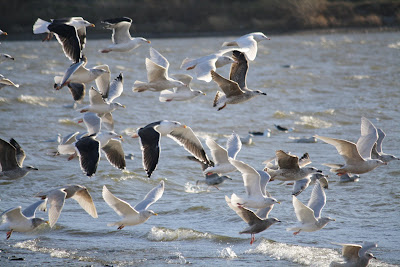 In a flash, the gulls flushed and the YLG was gone! I had missed my chance to get a picture of it. Well, I no longer had free time to go in search of this special gull and soon, winter passed. The rains came and the ice went out of Quidi Vidi Lake. I thought for sure that this rare sighting would go undocumented in my records. 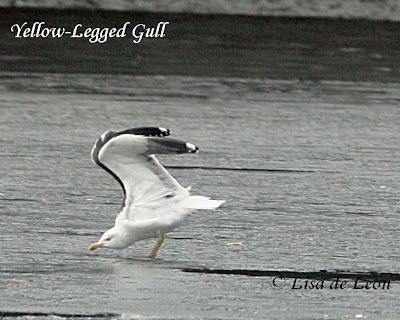 Well, today after work I toyed with the idea of taking a nap or going for a walk. Hmmmm what to do? Well, I decided that going for a walk was better for me so I dressed warm for that brisk wind that was blowing and grabbed my camera. I headed for Long Pond, Pippy Park. Aside from a few Robins near the parking lot there weren't many birds. I walked around the pond and spied some American Wigeons. One of the members of the discussion group was recently inquiring about where they could be found so I went through a trail to the water's edge to get a better look and take a count. Yep, there were American Wigeons, four in fact. Before returning to the trail, I looked out over the thin ice to see if there were any more Wigeons on the pond. What should I see but the Yellow-Legged Gull? What are the odds of that? There are thousands of gulls in St. John's and ONE Yellow-Legged Gull, and it was all mine for the snapping. The gull was about 50 yards away from shore! I really had to push the limits of my 250mm lens. I experimented with so many settings trying to ensure that I got at least one clear shot. The images uploaded here are less than 10% of the original image size - a major crop! 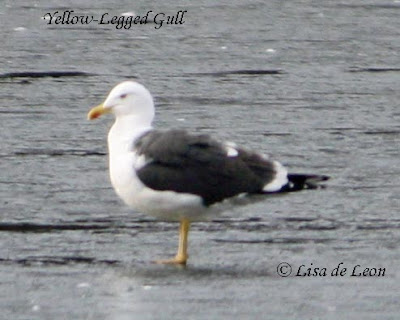 What makes this gull so special? Well, it's a "come-from-away," just like me. It is a southern European species that rarely finds its way here. Although, it has been documented in Newfoundland before. I am providing a link to the recorded event explained by Dave Fifield of MUN who documented the event in 1997. http://www.cs.mun.ca/~dave/ylgu.html This article gives a great description of the YLG and provides some good photos.


Needless to say, I am delighted that I went for a walk today instead of just dreaming about seeing the Yellow-Legged Gull.
Posted by Lisa de Leon at 8:30 PM