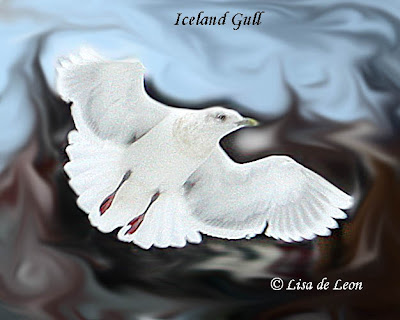 Who knew there were so many different kinds of gulls? Before when I saw flocks of gulls on the ice, on the fields or in the air I thought they were all the same. This winter, I learned different. There are many species of gulls; some very common and some quite rare to this part of the world.

Today, I sorted through my images of the Kumlien Iceland Gull. I almost started to shiver as I reviewed them. Not only did I have to battle gull accessibility, lighting, and lens limits, I also endured some very cold and windy days to take pictures. The snow and rain gets on the lens causing problems, and the wind blows the camera around adding already to my camera shake. Somewhere in between the shivering, I was able to snap a few shots


The above image was taken at QV Lake. The bottom half of that image had buildings showing too prominently behind the gull. It distracted a lot from the image of the gull, so I experimented with the smudge tool in Photoshop to bring the focus back onto the gull. 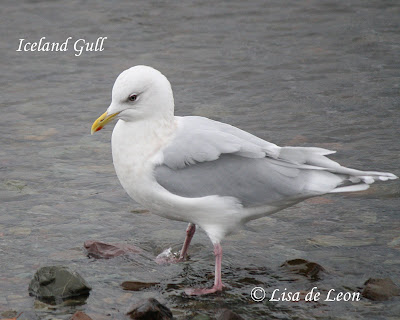 An Iceland Gull is most easily identified by the absence of black on the wings. The Kumlien variety has grey primaries and tips. The Iceland also has very pink legs, brighter pink than the Herring. Its head is often snow white but it does get streaks on the head during the winter. The beak is more narrow than the Herring Gull but does have the same kind of red mark on the lower beak. The yellow eye has a red eye ring. 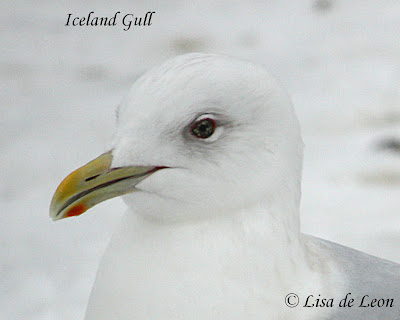 This close-up provides a clear view of the red eye ring and beak markings. 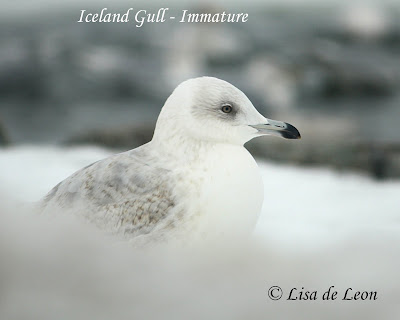 The Iceland Gull is a four-year gull. In the four years before it reaches adulthood, the Iceland undergoes several transformations. To illustrate I have provided a picture of an immature Iceland. The mantle has not yet become pale grey, and the bill is still partly back. Over time, the black will lessen and the yellow will appear. The legs will also change from pale pink to bright pink when the gull reaches adulthood. The constant identifier of this gull is the absence of black on the primaries.

I am looking forward to working toward better shots of all of the different kinds of gulls when the weather is warmer. I will have a lot more patience to wait for the bird and the elements to cooperate.
Posted by Lisa de Leon at 5:38 PM