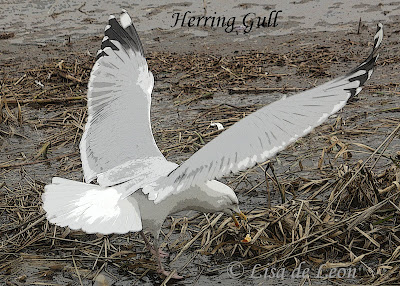 How about that weather on Sunday? A day to remember, "weather wise" but not "bird wise." I don't know what happened to the birds but it was like they just vanished into the woods. I enjoyed a long drive taking landscape pictures and enjoying the weather but not one small bird made an appearance. It is possible that the few eagles that were circling overhead had something to do with it. 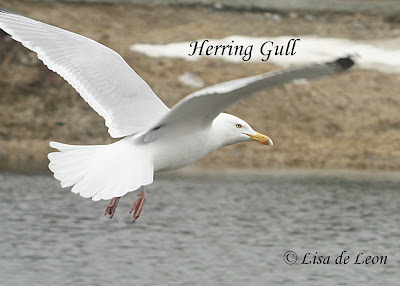 I went out briefly this morning to check on the Bufflehead that was at the Health Sciences Complex pond yesterday. No sign of it today or the Eurasian Wigeons but there were a few gulls there. I snapped the shot above today and decided it would be a good day to introduce the Herring Gull. It is the most common gull in St. John's and very easy to identify. This one is an adult Herring with its Spring coat on already. Key identifiers are the pinkish legs, the red spot on the lower bill, the red eye-ring around the yellow eye. It also has black wing tips with a circle pattern on them. When learning to identify gulls these are the key points to consider: The leg color, the markings on the bill, the eye color and ring, the mantle color and the wing tips. It is best to start with the most common ones first and move to the more complex birds to identify. 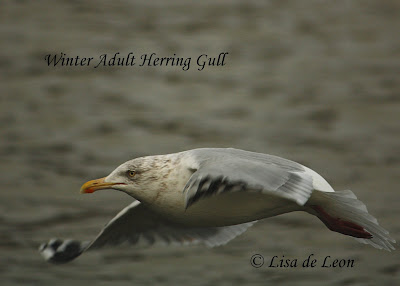 This is an adult Herring gull, too. Check the identifiers like the bill, the eye color, the leg color and the tips on the wing. Yet, this gull looks different because it has brown streaks on its head. That's because this Herring Gull is wearing his Winter coat. As Spring comes the heads of the adult Herring Gull will return to snow white, like the picture above. 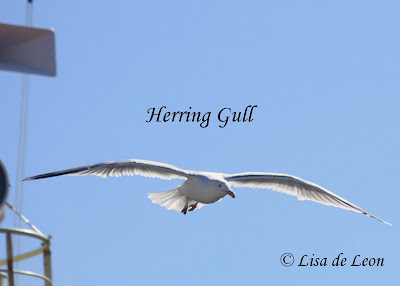 This shot taken as Pier 17 yesterday shows how wide the expanse of a Herring Gull is. They are large gulls, but not as large as the Greater Black Back. I will talk about the GBB on another day. 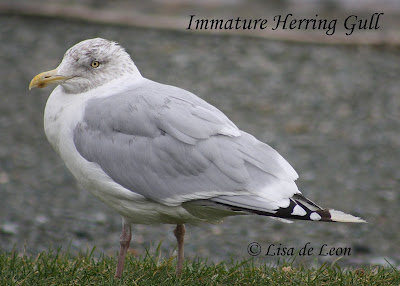 This is an immature Herring Gull. Note the streaking on its head, grayish. Note the bill-in-progress. It has not yet matured into the bright yellow bill with the very bright red spot. Its eye ring has not yet become red. All of this illustrates why it is a good idea to photograph the birds you view. Rarely will a bird behave long enough for a new birder to go through the identification checklist. Having a good picture is a great way to go home and review the details with the pictures and reference books. 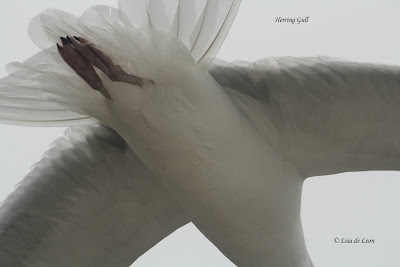 The one aspect of bird photography that captured my interest so quickly was what I saw when I viewed the pictures closely. This image of a Herring Gull shows how delicate and intricate the feathers are. Gulls tuck their feet up in a straight line when they are soaring through the sky. Every now and then, the light will reflect off the feathers or through the feathers to illuminate the sheer beauty of a bird that many consider to be a nuisance.

Every now and then, I capture an image that lends itself to a little creative "photoshopping," like the image at the top of the page. This picture was taken this morning after I threw some corn bread out to feed the birds. The Herring Gull hopped right over and helped himself. When he left, I wondered how the found the jalapeno peppers in it?
I find the gulls to be a great bird to practice the skill of bird photography. There are plenty of them around. They will pose, swim, lift off, hover and soar above. They can be photographed from ground level - eye-to-eye, from below and above depending on where I put myself. They move quickly and require a quick response and quick camera adjustments. What I have learned photographing gulls is now helping me to shoot smaller birds. And........ I still have so much to learn. The first and most important aspect of a good bird photo is that the eyes and the beak must be in focus.