I pulled out of the parking lot from work at 4:05 this afternoon. The sky was spitting a mixture of drizzle and ice pellets and the temperature was hovering around freezing. It certainly was not a day fit for birdwatching. Nevertheless, when my car got to the road, it somehow turned toward QV Lake instead of home. It was like "Herbie" was at the controls, and I was just along for the ride.

A flash of the rare yellow-legged gull flipped through my mind, but then, I thought "...hope I don't see anything special because I don't have my camera with me." I pulled into the Virginia River outflow parking lot and spied thousands of gulls on the ice. I grabbed my binoculars and started to scan the dots on the ice. In the poor light and distortion created by the rain, I knew there was no chance of spotting the YLG.
In less than two minutes about 4,000 gulls lifted off the ice. It had to be an eagle. Although, the gulls have been somewhat edgy lately and lift off for no obvious reason sometimes. (Given that there were five juvenile Bald Eagles hanging out around the lake, it is no wonder.) Then, the ducks lifted off. It had to be an eagle! I got out of the car and looked up and there was a stately adult Bald Eagle flying from East to West across the lake. Every bird that was on the ice was now in the air. I watched the eagle land about 40 yards from the west shore.

I didn't feel too badly about not having my camera because the conditions were not suitable to producing a good picture. Nevertheless, it is always a spectacle to see the forces of nature. The sheer presence of this single bald eagle unsettled thousands of resting gulls and ducks.

In case you have never seen flocks of gulls take to the sky in fright, I have provided a picture below of a "lift off" captured last Fall. Most of the gulls in the flock shot are herring gulls. 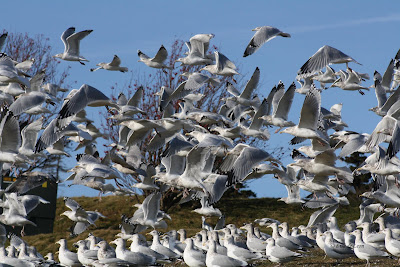 Since gulls are on my mind, I decid 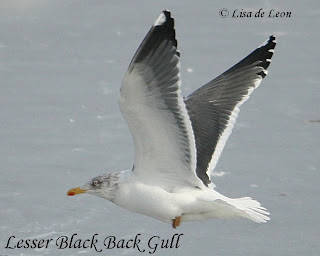 ed to label a couple of shots of Lesser Black Back Gulls and share them. The lesser black back gull is a relatively small gull compared to the herring gull. It often looks a bit scruffy until it reaches adulthood. LBBG goes through four years of transformations before it reaches adult plumage. They are distinguished by their bright yellow legs, dark grey mantle, red eye circle, and a yellow bill with a red marking on it. The 3rd year gull still has black on the bill. This fades in the 4th year and the bill becomes bright yellow like the one pictured on the left. The dark markings on the head are part of the winter plumage. This will evolve to white by summer. The lesser black back also has a more angular head than a herring gull.
Having taught many different courses in high school for a number of years, I quickly learned there is no better way to become knowledgeable about a subject, than to teach it to others. Here I am continuing to learn and share:) 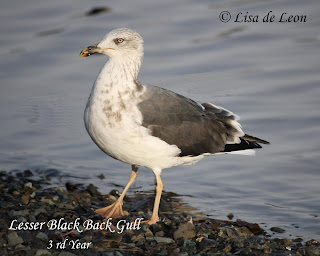