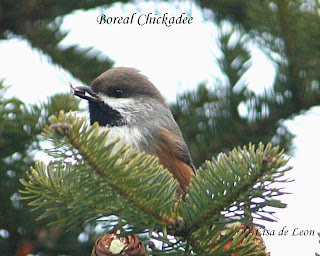 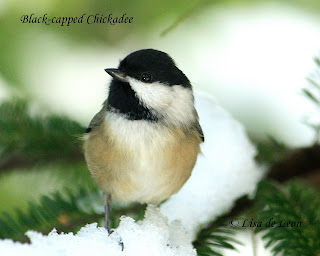 There are at least five different kinds of chickadees that take up residence in Canada. All bare a resemblance. Of the five, only two are known to make Newfoundland their home. You might say that the two chickadees pictured here are cousins, but not "kissin' cousins." They don't hang out together. They share the mutual friends of Juncos but tend to not group in the same flocks. The Boreal Chickadee is most often seen with Golden-crowned Kinglets.

Despite their differences they behave similarly. They flit around very quickly and will chance human contact in order to dine on bird seed and sunflower seeds. Note the similar throat coloring and eye line. The Boreal Chickadee has a brown head while the "Black-capped....." Well, the name says it all.

It is more likely that a Black-capped Chickadee will show up at a bird feeder than a Boreal. The image of the Black-capped Chickadee was taken at Long Pond, Pippy Park bird feeder. I found the Boreal Chickadee when driving down Bauline Line toward Torbay. I noticed several Juncos fly across the highway in front of me. That is a good indicator that a group of birds may be nearby. I stopped and began walking in a woody trail. Within moments, there was the Boreal. I only have a few pictures of Boreals because they are not as prevalent, it seems, as the Black-capped.

It is a bit tricky to get a good picture of either of these birds because the eye will often fade into the darkness of the head. I used a flash on the Black-capped to make the eye more prominent.

It wasn't until I began this project that I realized how many pictures I have accumulated.
Weather permitting, I will go birding tomorrow.
Posted by Lisa de Leon at 6:25 PM