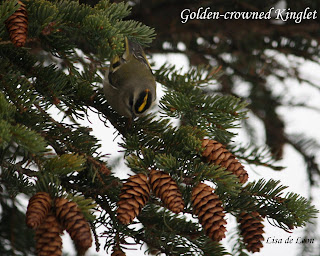 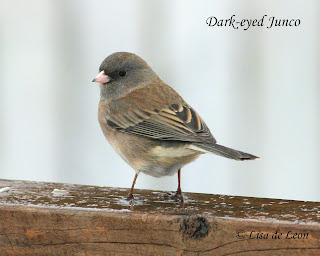 I wanted to continue to work on small bird images this evening since I had already worked on images of sparrows and chickadees. Tonight, I am sharing images of the Golden-crowned Kinglet and a Dark-eyed (Slate Colored) Junco.

The Golden-crowned Kinglet is a pretty little bird, but I have had a hard time getting a great shot of one. They tend to stay in close to the trunk and flutter a lot. They are very busy birds and can hover much like a hummingbird. Their coloring is particularly nice. I wanted to show the color on the crown that cannot be seen on side images of this bird. Kinglets do not typically stay in the same trees as groups of junco but are often only a tree or two away. There is also a Ruby-crowned Kinglet. I "think" I saw two one day but they flew by so quickly that I couldn't photograph them. I don't count the bird unless I have a clear record shot or someone else verifies the sighting.

The Dark-eyed Junco is everywhere! I shot this one from my kitchen window. Even though he is brown with brown streaking, it really is a Slate-colored Junco. This is the youthful rendition. Juncos are very friendly and will continue to feed with spectators looking on.

I did get out birding today and spent way too much time at it. I started watching the eagles at Quidi Vidi. I didn't get any great shots of them because I couldn't get the settings of my camera to fit the strange grey haze in the air. I am really looking forward to the sun shining again. Nothing beats natural light. I went on to Pier 17 but since the sewage outlet has been closed, there wasn't much to see there. I took a jaunt to Long Pond and it was virtually "birdless!"

Not to worry, though. There are many places to go. I headed out the Bauline Line Extension and came upon two small birds with very red heads and dark black and white wing tips. Couldn't stop the car fast enough to photograph them, and I have no idea what they were.

I drove on and came upon another group of birds with great flashes of red. I stopped the car and stayed in the car until they came out on the road again. A car is a perfect blind. When the group returned, I made my way out of the car to take some record shots. Those are the first and most important ones pictures. They prove to me that I saw the bird. I took several shots and was eager to start my comparison with the many pictures in my books.

I had something new to add to my life list, I drove on with a great deal of satisfaction. I headed to Pouch Cove and Flatrock to see if there were any signs of sea birds, most particularly the Ivory Gull. No luck there, but it was a nice drive. Great scenery. I was happy to head home to see what I had stored in my camera.

When I got home I downloaded my pictures and identified the two new birds to add to my list. I had seen a White-winged Crossbill and a Pine Grosbeak. I don't know why the crossbill is known for its two white wings when its red color is so vibrant. It's not everyday that I get to add a new bird to my life list. I just got an e-mail to confirm the identification of these two birds and much to my amazement, there is a third variety among them - a Pine Siskin. That is three new birds for my list. (They are all finch-like birds.) I am very satisfied with today's trip.

If I can't control the urge, I may go out again tomorrow ;)