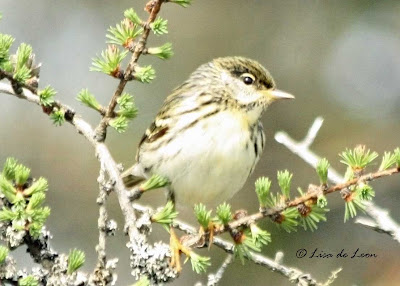 My list of warblers is growing slowly. Over the last month I have seen: Yellow-rumped Warblers, Black and White Warblers, Wilson's Warbler and the Blackpoll. This number is quite small for this time of the year, but it seems everything in nature in Newfoundland is behind schedule.  Our winter started late but made sure that it squeezed in its dutiful length of time anyway. That meant that the cold temperatures, high winds and rains of early Spring have lingered much longer than usual. The good weather still has not broken through. 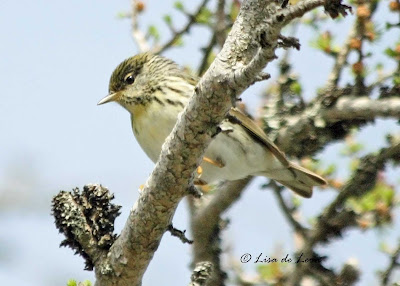 I guess the upside of this is that it allows me to enjoy each new warbler a little more and work on identifying their songs more before the next arrival. So far this Spring I have seen four Blackpoll Warblers - three females and one male. 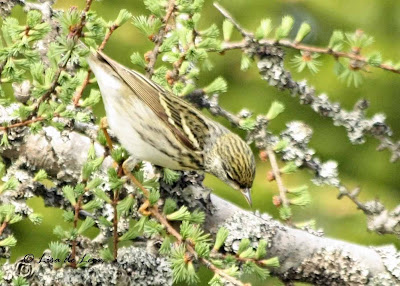 This little female warbler was photographed in Goulds. From the colors and general markings on this bird, I was pretty sure that it was a Blackpoll. However, when I began looking on-line for an exact match, I couldn't find one. I began to doubt myself and sent the photo to someone who would know for sure. He confirmed that it is, indeed, a Blackpoll and added that female Blackpolls are rarely accurately illustrated in many resources. 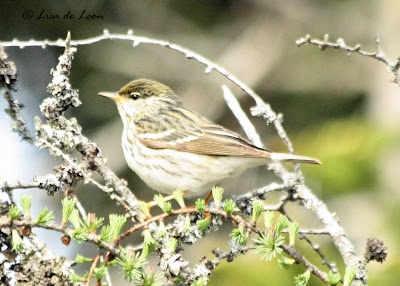 This particular bird was quite brave and stayed in the tree in front of me for about ten minutes. That is pretty unusual for most any small bird. 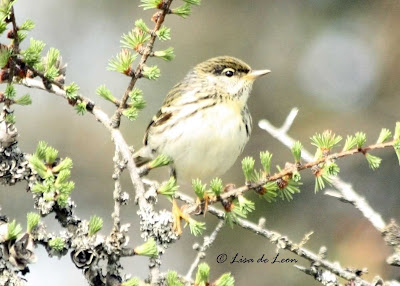 Yesterday, I returned to the area where I found this one earlier in the week. While I heard many birds, I saw few. Perhaps it was the high winds that kept them from popping out. The wind certainly played tricks with the sounds of song. It was very difficult to find the exact location of the many songs that surrounded us. Of particular interest yesterday were three different bird songs/calls that I have never heard before. We tried our best to get a look at these mystery birds but had no luck. They have been on my mind and I may have to run out again today to see if I can get a look. 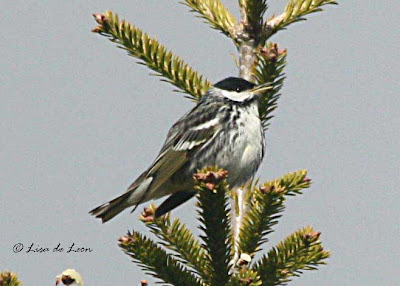 As I mentioned above I have only seen one male Blackpoll this year and was unable to photograph it. For the purpose of comparison, I have added a photo of a male that I photographed last year. Clearly, their markings are darker and more distinct than the female.
Posted by Lisa de Leon at 7:19 AM