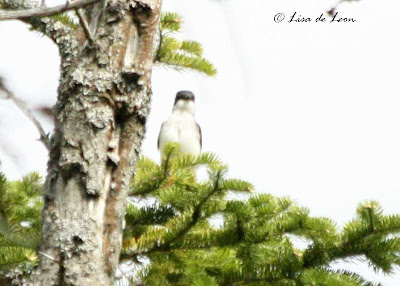 Saturday, last, turned out to be an atypical birding experience for me. The weather dawned much better than forecast, and I just had to drop other things and see what I could find singing in the early morning hours at Bidgood's Park. I was not disappointed. 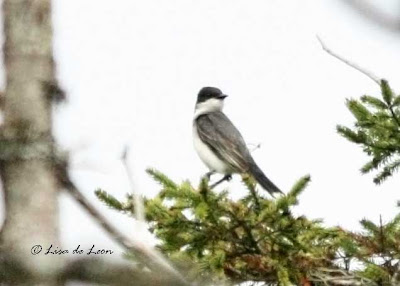 After scouring the woods for an elusive mystery bird that I heard the evening before, I popped out into an opening. The first thing I saw was this Eastern Kingbird perched on a branch looking at me. I was pretty surprised. Eastern Kingbirds are a fairly common sight in Arkansas but this is my first in Newfoundland. 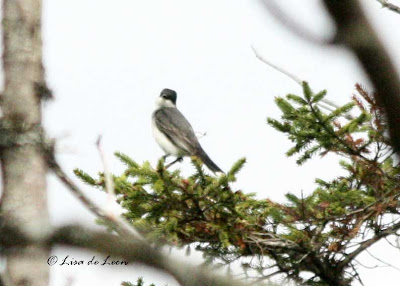 Frankly, it looked brighter and sharper looking than an Arkansas bird in late July. It is clear that the heat and sunshine plays havoc with the coat in the South. 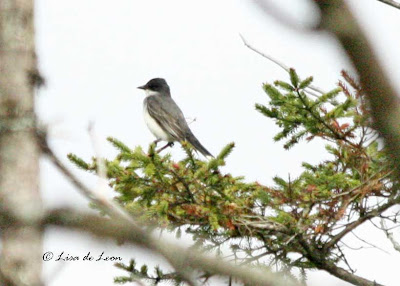 As nice as this was, this is not the bird that I pursued most of the morning. There was a very distinct, loud bird song that I had never heard before and I was very eager to get a look at this bird to know what it was. 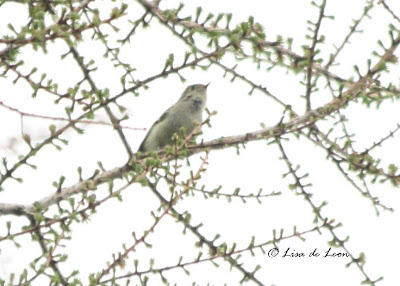 It stayed high in the trees and sang its song repeatedly. For the longest time I couldn't get a look at it, then finally, it showed itself. It was so high that I couldn't really see it well so I snapped a few shots in the hopes of identifying it after I got home.  I checked the bird song of the Ruby-crowned Kinglet, several different flycatchers and several different warblers. I could not find the song to match this bird. At that point, I turned to several knowledgeable birders for help. The outcome is that this is a Ruby-crowned Kinglet. You could have fooled me because I was trying to match that song with a bird. I listened to almost 7 minutes of song at the McCauley Library (recommended by two birders consulted) and the song I heard was not included. Yet, I have to buy into the fact that this is a RC Kinglet because all of the characteristics of the bird in the photo match.

This is one component of birdwatching that makes it so interesting and such a challenge....not every song is recorded and not every bird is exactly the same as the illustrations. This makes this activity bigger than a matching game. It requires experience, a lot of experience to be able to come up with an id of  even a common bird. 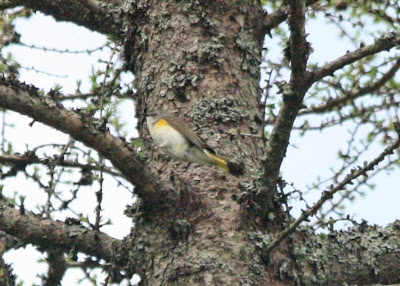 There was a report last week of a female American Redstart at the park. I really didn't think that I would find it but low and behold, I looked up trying to find the location of yet another different song and there in front of me was the AR.

It is funny because sometimes when I go birding I come up empty-handed and on other days, the bounty just keeps coming. 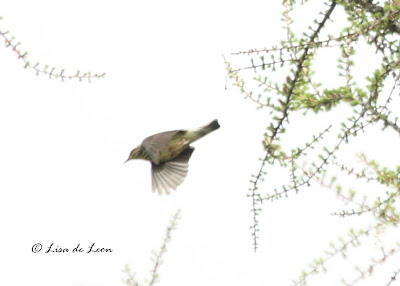 The Northern Waterthrush was very busy filling up the woods with its song. On a quiet morning in the woods it is often like a rich symphony of different songs of different birds all coming together. While they are all unique, I have never heard any dissonant mix. It is real music to my ears.

Speaking of which, I got a hearing contraption that I hope will enhance my ability to hear the higher pitched bird sounds.  I wonder when the sun will shine again.
Posted by Lisa de Leon at 1:56 PM