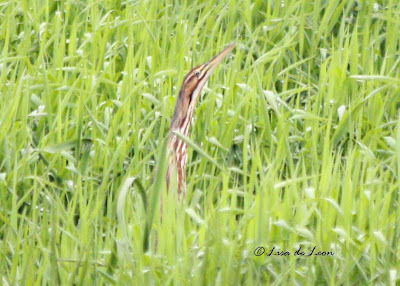 On yet another grey day, I went for a walk in the park. If I wait for the weather to clear, my body might seize up. Over the summer I have heard the American Bittern at Long Pond but couldn't see it there, despite many efforts.

Quite by accident I have seen as many as three American Bittern in Goulds. On one occasion, three lifted off just ahead of me and flew into the distance.

Yesterday, while walking around the park, I looked up and there was a bittern flying over my head. This was quite some distance from the water. I don't know where it came from or where it was going. 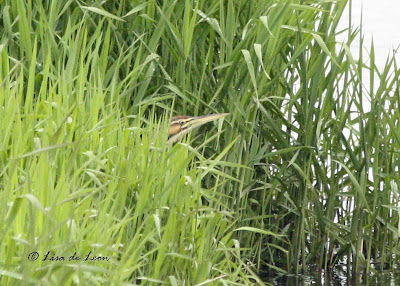 I just thought that was nice and nothing more. I went on with my walk and sometime later I was crossing a walking bridge and spotted this thin head and neck sticking up and out of the talk grass. I froze in my tracks and watched. 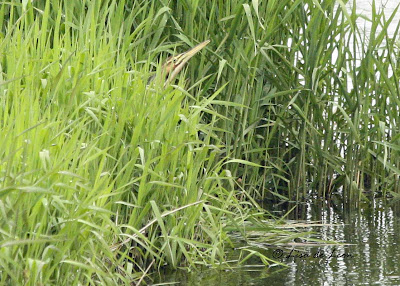 It quickly ducked down and disappeared. I waited. In about ten minutes, I spotted its head sticking out of the grass at the water's edge. It was being so cautious. After only moments there, it disappeared again. 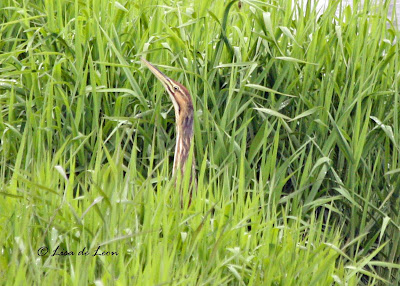 Another short wait and I spotted the American Bittern once again poking its head up through the grass. It seemed to be checking the safety of movement. 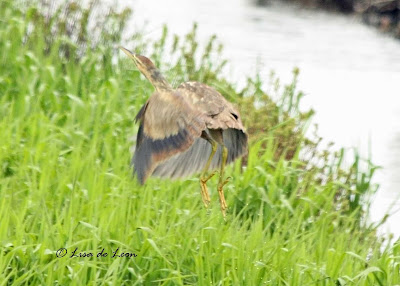 In a flash it jumped into the air to make a short flight. Its long wings surrounded its legs and formed a skirt, kind of like a "hoop" skirt of old.

It is pretty special to see this bird when not in flight because it has the great ability to blend in with the surroundings and disappear. The advantage now is that the grass is all green and its brown colors really stand out.  As the natural surrounding change, this tropical looking bird will be able to pop up right in front of you and trust that it won't be seen. 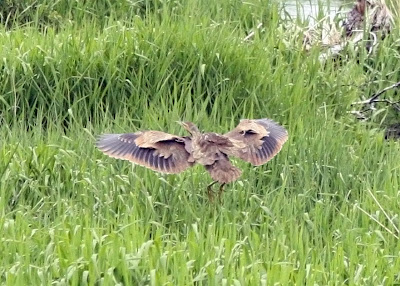 After only moving about ten feet it spread its wings to go in for a landing and then it quickly disappeared again.
Posted by Lisa de Leon at 8:31 AM