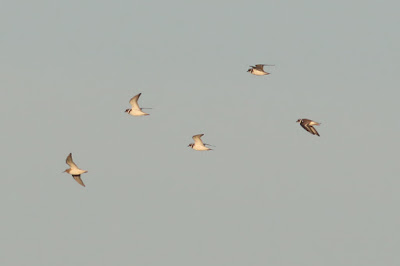 Fall birding brings with it a mix of common, uncommon and rare birds. That is what makes birding during migration so exciting. One never knows what it hiding in the alders just feet away. 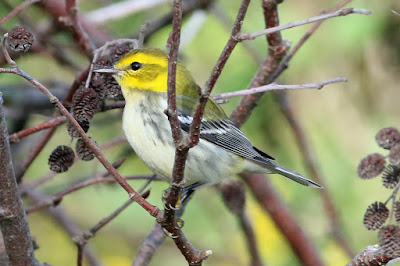 There is no particular order to the photos shared here today as they were taken in a variety of locations on different days. However, that is somewhat fitting as fall birding is like that. 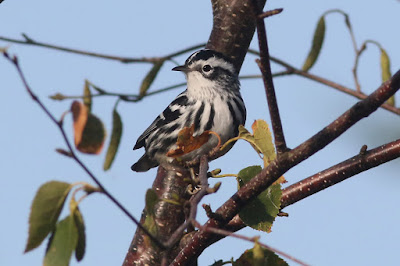 As birders we bounce about from known hotspots in the hopes of seeing something really nice. Some of these pics have stories and others just represent nice moments. 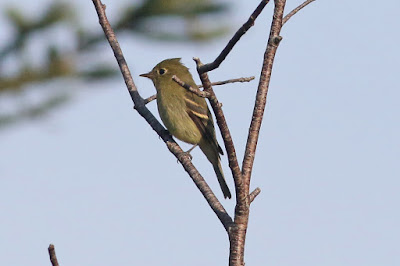 Shorebirds show up yearly in the fields in Goulds. One of the nice ones is shown in this series. The first pictures shows a Baird's Sandpiper which decided to fly away just as I arrived at the field. The one and only shot I have of it captured it before its departure. The other was a Buff-breasted Sandpiper. I missed otherl shorebirds that stopped over briefly including a Pectoral and Dunlin. C'est la vie! 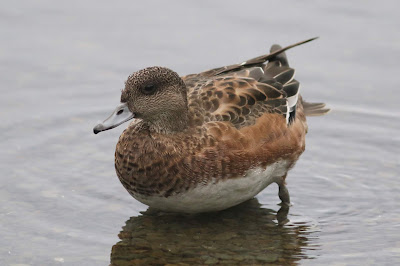 Widgeons are moving back into their usual places. 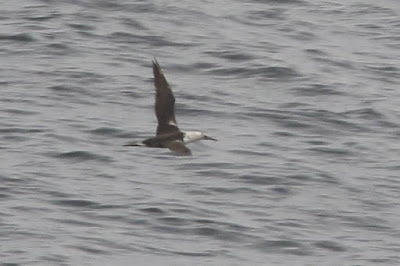 This Northern Gannet fly-by at Cape Spear made me do a big double-take. There had recently been a Brown Booby reported in the waters off Newfoundland. That was in my mind when I saw this dark, distant bird fly by.  Good thing I got a picture or I would have forever wondered if I had missed a really great bird. 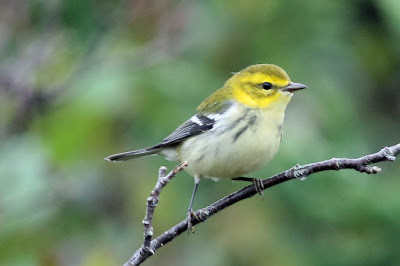 Black-throated Greens have been quite common around St. John's lately. This is always nice. 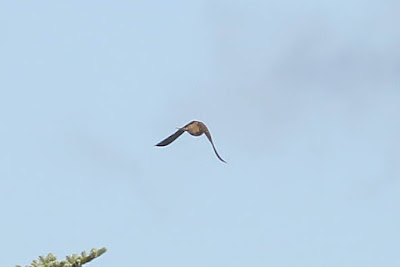 How many birds just get away? Too many, for sure, but not this time. Ethel Dempsey and I were birding near Cappahayden when we spotted a Rose-breasted Grosbeak. Straining to get pictures we shot continuously. Then, suddenly, two birds of the same size flew out of the alder and left us with our mouths agape. Two? 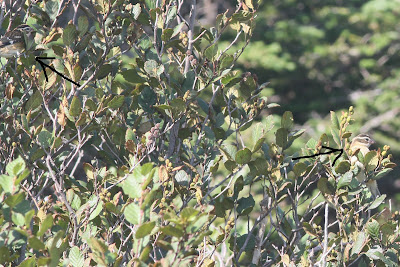 We did not knowingly photography two Rose-breasted Grosbeaks. What was the second bird? We left the area unsure and hoping with all of our shots, we might have picked up the other bird without knowing it. Sure enough, when going through my pictures I found three that capture two of these great birds in the same shot. Mystery solved. Not all mysteries get solved by any means. 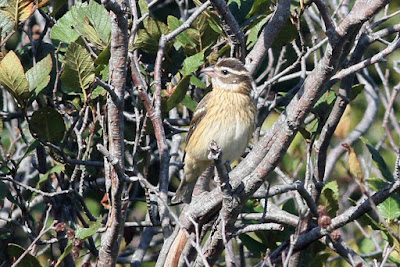 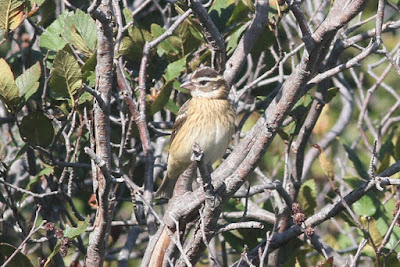 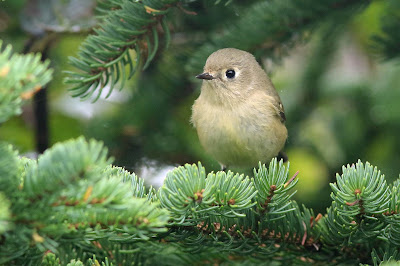 Kinglets keep popping out all over the place. Some Ruby-crowned and some Golden-crowned. Always nice to see them. 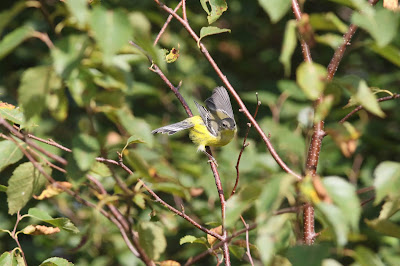 Magnolias have been plentiful this fall, looking just as nice in their fall plumage as they do in their spring suit. 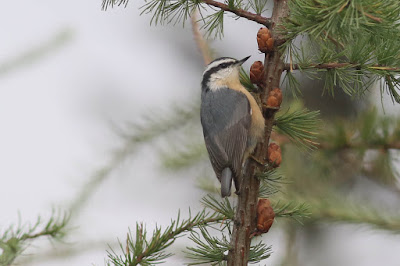 Plentiful is not the word for Red-breasted Nuthatch. They have been abundant! This is a big contrast to the last couple of years. 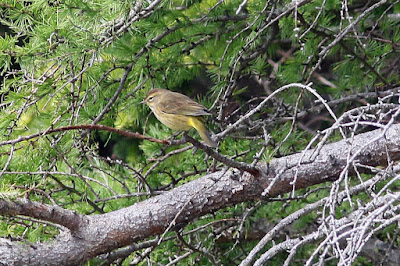 Palm Warbler frequent the Avalon typically during migration. Twice this year I had a four-Palm Warbler day. That is unusual. 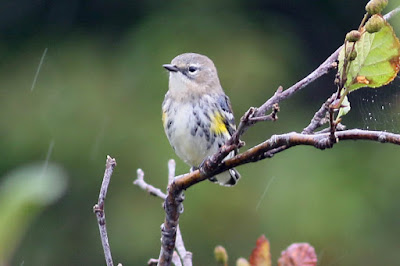 Lingering to the very end are the Yellow-rumped Warblers. Long after many other species have left, we can usually count on seeing the Yellow-rump flash by. Note the slanted rain streaks here. That, too, is a added challenge of fall birding in NL. The elements do not make it easy on birders. 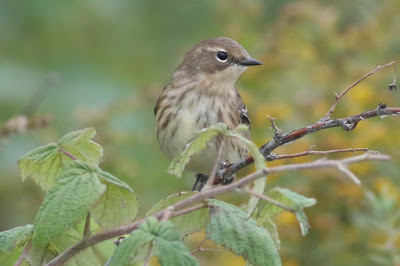 It is not only nice to see them, but they also provide company to the migrating birds. Rule: See a Yellow-rumped Warbler; stick around and look closely for something more exciting with them. 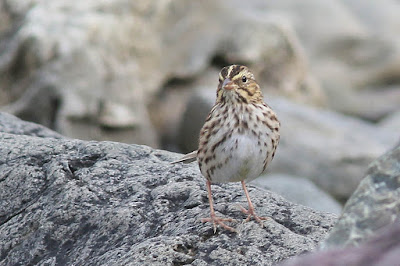 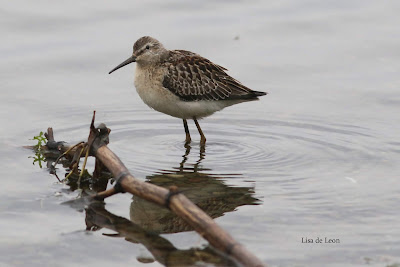 This nice Stilt Sandpiper showed up at Virginia Lake this fall. It popped in intermittently over several days. This is not typical. It was several years before I saw my first Stilt. 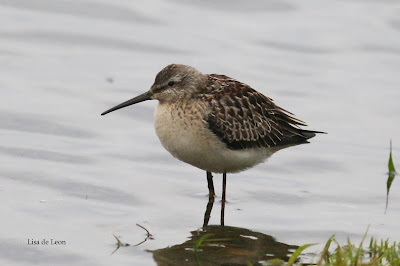 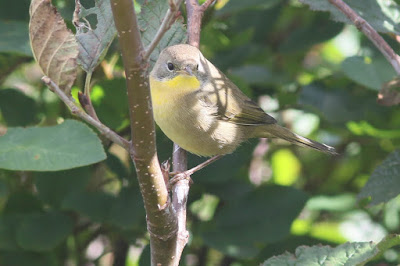 Often sticking around later than most birds, the Common Yellowthroat can often be found moving around in low bushes and alone. 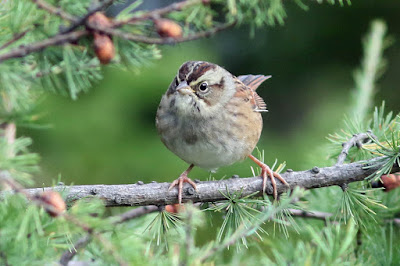 White-throated Sparrows are also among the last to leave. A flick of a branch easily alerts birders to their presence. 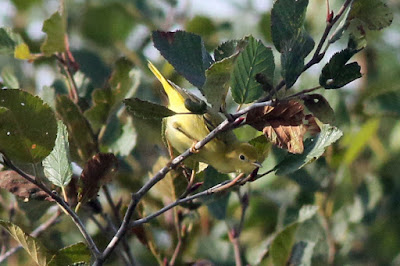 It won't be long now until the woods go quiet and we all settle in for a long winter's wait for the warblers to return. Sigh.....
Posted by Lisa de Leon at 6:13 AM