Yesterday, I joined Catherine Barrett for a day of birding the southern shore. We expected it to be challenging as the winds were super high. Most birds stayed low or out of sight. Few sea birds were close to shore. Despite this, we did see some nice birds, some closer than ever before.

The day started with a persistent effort that paid off. We were able to see the Northern Mockingbird, playing hard to get in Mobile. Thanks Alvan for this find. 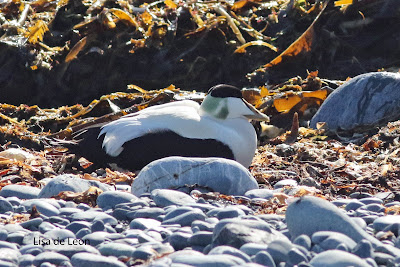 Bear Cove Beach turned up an unusual opportunity to see a male Common Eider up close. This single bird sat low on the beach and remained undisturbed by us. Nice chance to really see the colors. 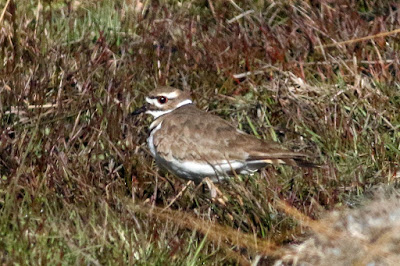 Catherine's eagle-eye yielded this Kildeer hunkered down in a low ditch. 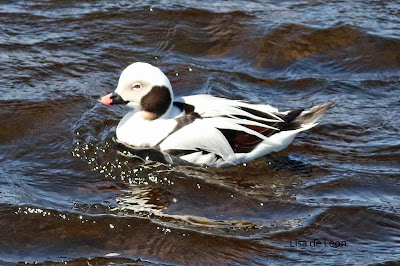 Once again, ever-vigilant-Catherine, spotted this beautiful Long-tailed Duck sitting on the bank of the river running out to St. Shott's beach. 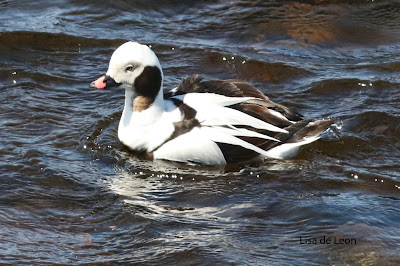 It was a remarkable opportunity to see the brilliance of the "artsy" look of the feathers of this bird. 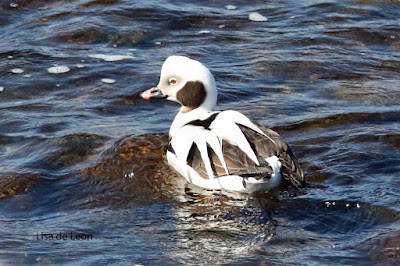 Typical of all sea birds, they don't stick around long once they know they are in the company of humans. It was nice this one didn't fly off right away, but did a turn around the area giving us a terrific chance to study it. 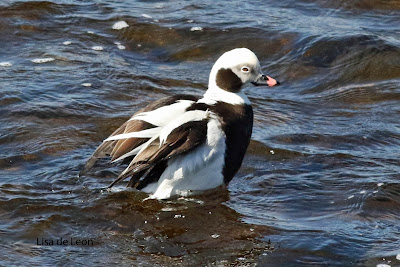 I have to add the wind was so terrifyingly high, we wouldn't even consider getting out of the car by the St. Shott's  point! 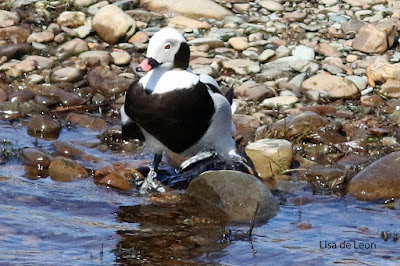 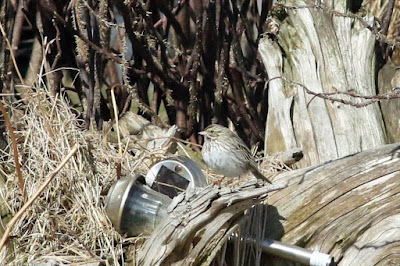 The feeder of Gord H. in PCS offered up a pale Savannah Sparrow. Also seen later in the day was the Clay-colored Sparrow in Trepassey. Pics taken in the shady area did not turn out well. 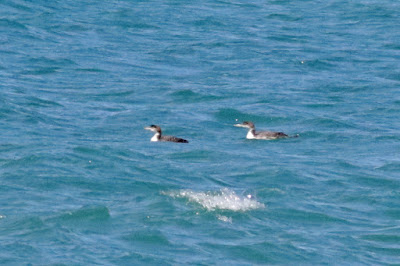 In St. Mary's we ventured out of the car even though the wind was "raw!" I took several shots of these two loons. The bill of one looks much smaller in every shot. Yet, I'm pretty sure they are both Common Loons. 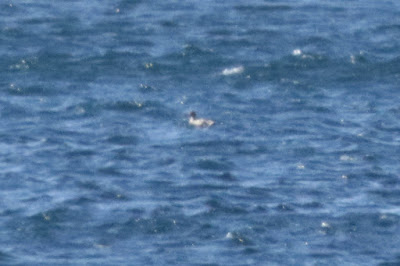 What would a day of birding be without coming home with at least one mystery bird. This distant shot was taken from the car in Cappahayden. By the time I realized the bird was too big to be a Guillemot etc., we turned off the motor, and I set up to get a better pic. Well, the bird didn't cooperate. It vanished. Best guess - a loon?

Wind or no wind, it is always fun to explore just what birds might be waiting to be seen.
Posted by Lisa de Leon at 9:25 AM