Not Always the Same 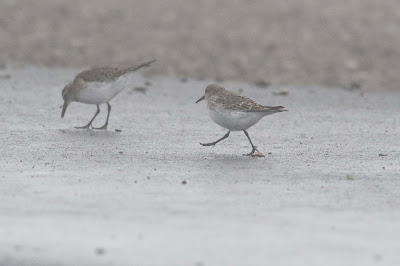 One advantage of few birds being around is the willingness to take lingering looks at common birds. Conditions are not always ideal, but you take what you can get. At 8 a.m. the world was still dark in Newfoundland, overcast and complicated by thick fog. It really is a wonder you can see anything. 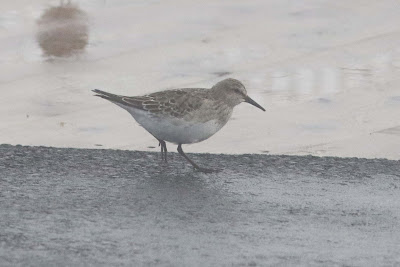 When I neared the parking lot at Cape Spear  last Saturday, two shore birds flew up from the side of the road. The quick look I got clearly showed white rumps. That took the mystery out of the ID. The birds moved around a lot and crossed my path a few more times. Note the first picture above. The two birds in close proximity to each other show differently. One has longer legs than the other. That interested me, so I made a point of getting closer shots of each bird. 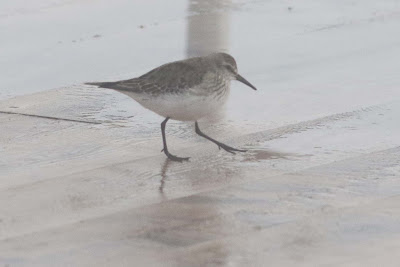 The first individual is the taller one. Its wings also extend out further beyond the tail than the second individual. There is also variation in the coloring, but that is pretty common. Hmmm, I wondered if there were a difference in size of female and male. I never noticed it before.  Peterson indicates a size range from 7" to 8". That probably accounts for it. 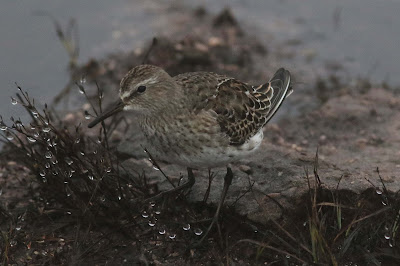 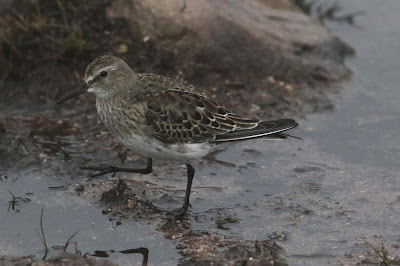 I am pretty sure this is the same individual I saw in the same spot nearly a month ago. This bird had become more accustomed to passersby. It seemed quite comfortable moving closer to me. 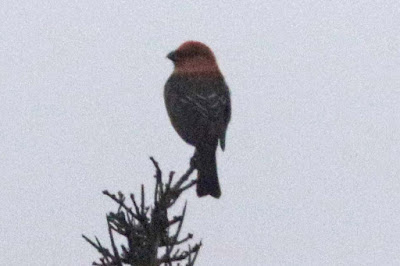 Fog, darkness and distance add up to confusion. This was the case with this finch. Checking its beak, it certainly looks like a Pine Grosbeak, but as I look at the markings on the back and wings of this bird I see what is an atypical pattern. Can't think of any other species it could be. 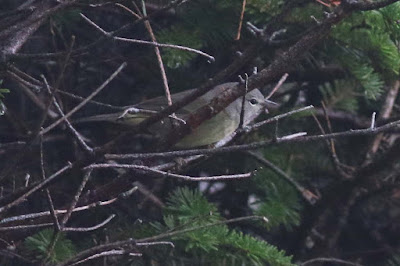 It was almost a relief to find a typical looking Orange-crowned Warbler hiding away along the trail. I was just about to leave when I caught sight of a grayish-looking bird fly down. 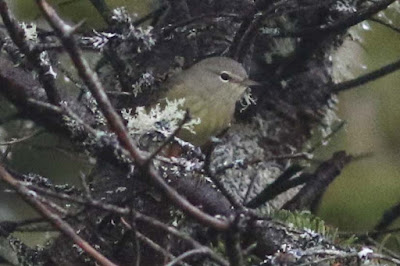 Sticking around for a while longer, I was able to get identifying looks at this bird. Fall birding requires a lot of walking and looking, often finding nothing. This time of the year also presents birds of a different feather and the potential for species that do not belong hear. The longer we get into the season, the stranger the list of appearing birds like the Black Vulture in Burgeo and the Yellow-breasted Bunting in Labrador. The wonder of nature!
Posted by Lisa de Leon at 12:27 PM