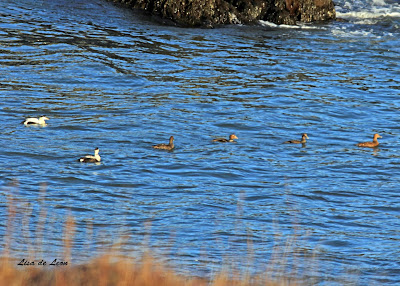 Upon arriving at Cripple Cove on Monday, the first group of water fowl, a small flock of eider, began moving out of the area. Despite the harsh effect of the late-day sun, it was apparent one of the brown eiders was different. 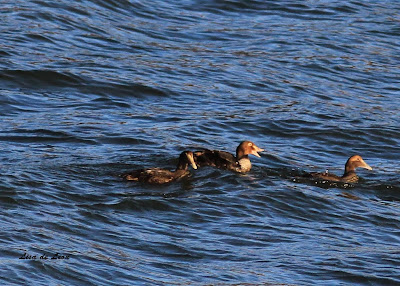 The first difference I noticed was the white breast suggesting the odd-one-out was an immature. But,  that wasn't all that was different. The beak on this bird was definitely different, so much so that it changed the shape of the head. 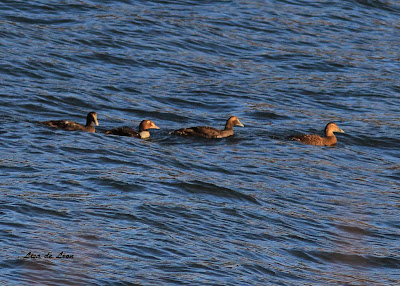 I was mystified by the large white eye ring because none of the photos in my guide showed that. This is the first time I have seen eiders this close to shore, so my experience with the immature or female King Eider head is nil. It is OK to stare at book images day in and day out, but for me it takes a good, live look at the birds in front of me. Seeing the differences in the beak and the head of a King side-by-side with a Common  has imprinted the King Eider beak into my mind. 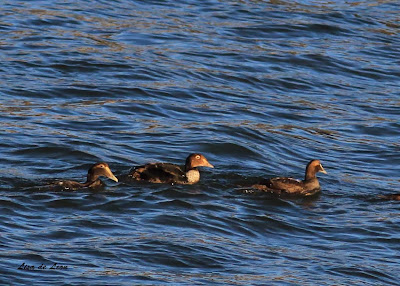 Hesitant to make the call that this might be a King Eider, I sent the photos to Bruce Mactavish who confirmed this to be an immature male King. This morning I looked at several hundred images of King Eiders and found only four that resembled this first winter male King Eider. How nice it was to be able to study this bird relatively close. The only King Eiders I have seen before were full-on adult male Kings through a scope. It is hard to misidentify them. While they are really great, this one is better because it provided yet another opportunity for study. As always, thanks Bruce for your help. (Be sure to click to enlarge images for a better look.)
Posted by Lisa de Leon at 7:22 AM