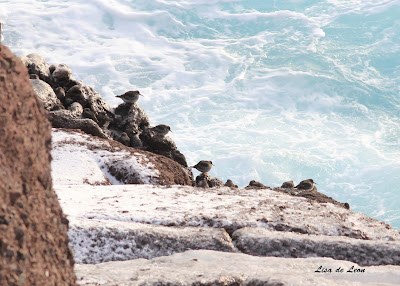 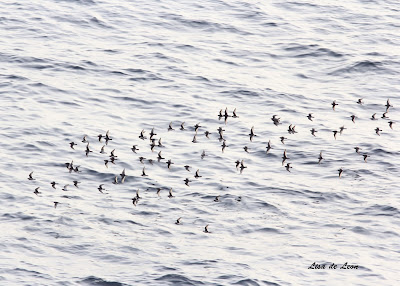 We had one nice day this last week sans wind, snow or rain. I seized the opportunity to get out during the morning to enjoy the conditions and see what birds I might see. Unable to resist the drive out to Cape Spear, I was rewarded for my efforts. Walking around the trail, just below the cannon, I spotted a few sandpipers. In this first shot there are 17 Purple Sandpipers sitting on the ledge. I watched for a while and strained to see them well in the hopes of finding the odd-one-out reported late last week. 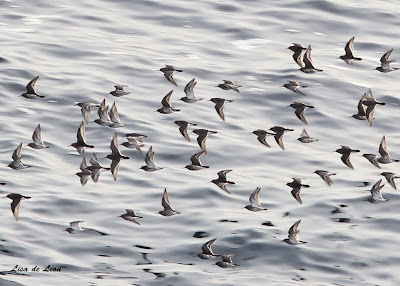 In short order they lifted off and gave me a great opportunity to get pictures that I could really scrutinize for anything different. In one shot, I counted 87 of these arctic sandpipers. Even then, I didn't get them all in the picture. 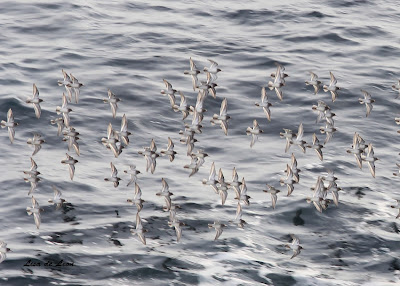 Totally synchronized, they flew past me showing their upper markings and then flipped over to display the underside. Try as I did, I could not find anything different among them. However, the show was spectacular. 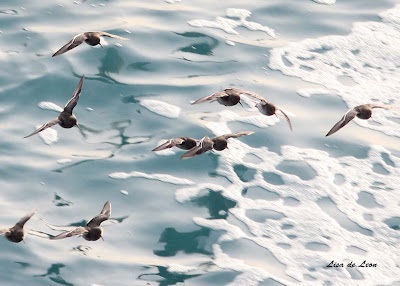 Soon the sandpipers returned to the rocks below me. This is the largest flock of Purple Sandpipers I have ever seen, and it was amazing. 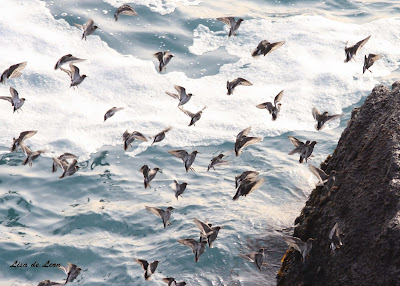 I decided to give them some alone time and returned to the look-out to get a better look at the two Black Scoters hanging out in the surf. 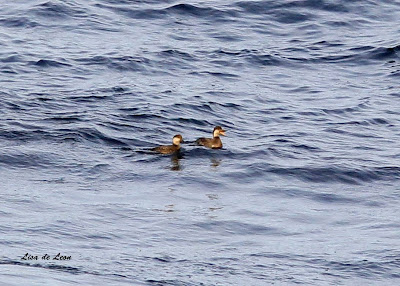 As one was steadily calling. I couldn't help but wonder why. 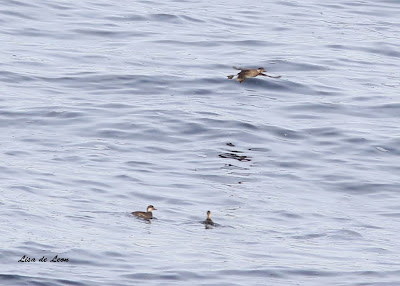 Then, in short order, I saw the reason. Another Black Scoter was flying in, and I guess the call was a beacon to let the in-coming bird know where they were. Being very close to shore, I was able to get great looks at them.

It was actually the scoters and an odd incident that led me to get and walk around. I was sitting in the car in the parking lot scanning the area when I first spotted the scoters. I was contemplating whether to get out to make the walk.

While sitting there, a man drove up, got out of his car, donned his hat and gloves and reached into the car to pull out a long, sling-back case to throw over his shoulder. The case wasn't a typical gun case, but the shape was. "Uh-oh," I thought. Those scoters might be doomed. In an effort to prevent what I feared might be about to unfold, I got out and walked the lower trail while he walked the upper trail. When I reached the first look-out, I was stunned by the mournful, wailing sound coming from up above. The man was near the signs on the upper look-out blowing some type of horned instrument. What was that sound? If I had to compare it to anything it would be similar to an eerie whale song. What was going on? Not wanting to be too invasive, I didn't put my binoculars on him, but continued my walk toward his location. Then, without any further fanfare, the haunting sound ended. When I reached the upper deck, he was gone. What was that all about? I have long since given up trying to understand what I see and hear at Cape Spear. Nevertheless, I always find it engaging.
Posted by Lisa de Leon at 7:24 AM