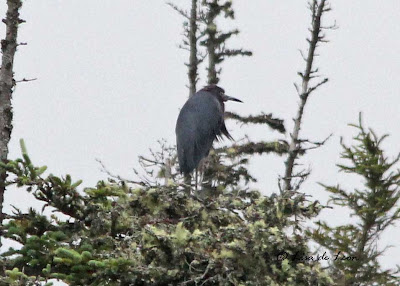 It was mid-summer when the word went out that a Little Blue Heron had been spotted in a back yard in Logy Bay. Pictures documented its visit. It was not to be seen again for a few days until it was flushed at Jones Pond. It was never spotted in the Logy Bay area again.

Just a week or ten days ago, a birder spotted this Little Blue Heron in a marshy area in Blaketown. Birders wasted no time getting out to see it for fear that it would disappear again. A resident from a nearby community told me that this bird has been in the area for quite some time often flying over houses some 10 km away. 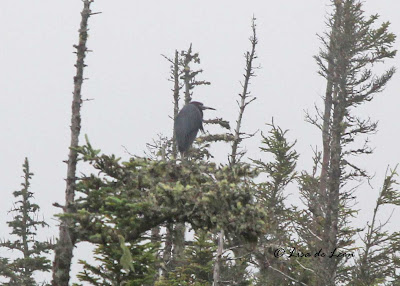 Yet, there were some birders who made the hour and one half trip only to miss seeing this Little Blue Heron. Could it possibly be the same one?  Who knows.  I made my trip down one morning and arrived around 9:30. The fog had not lifted and the day was not shaping up very well.

This bird was located behind a local business that had a fenced yard. The staff of the business took their role as host to this rare vagrant bird very seriously.  They seemed to keep an eye on its whereabouts and happily guided a steady stream of bird watchers to its location.

When I arrived it was perched high atop a tree on the other side of the marsh, at times shrouded in fog. I waited and watched for about 45 minutes but it never moved. Since I wanted to squeeze in some shore bird searches in the day, I decided not to wait any longer.

I have seen a number of these birds in the South but this is my first one to see in Newfoundland. If you wait long enough, an exciting variety of species is eventually going to find itself right here.
Posted by Lisa de Leon at 8:29 AM