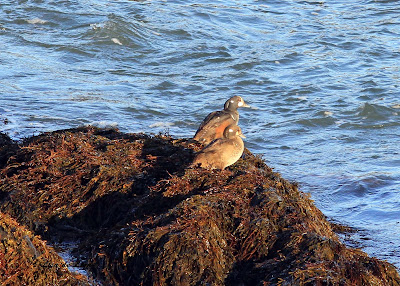 Some things are just meant to be. I have been chasing a Harlequin Duck for two years now, with no luck. My latest attempt was in Witless Bay when I followed Ed Hayden's directions in pursuit of a female Harlequin. While I had no luck, I did have the most amazing hike around the bay on the Beaches East Coast Trail. I left thinking that was just what I needed on that day. 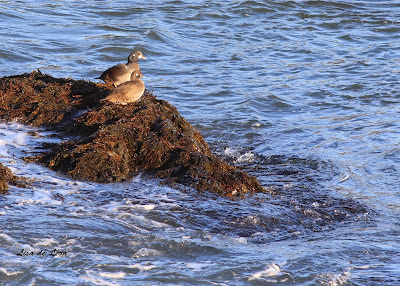 Well, this weekend, Catherine Barrett invited me to join her on a trip to Cape Race. On Sunday, I was more responsible opting not to go but rather do a long list of chores. It turned out that she thought she was unable to go. Well, that changed, and she called me again on Monday. About mid-morning, I was much less disciplined and decided to go. Why not? 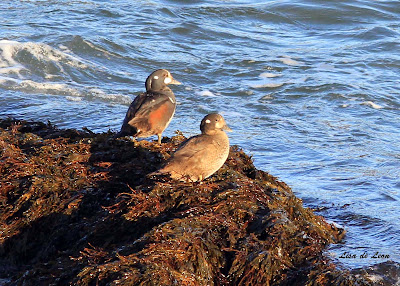 With very short days, we made a beeline to Cape Race. In under two hours we were counting Snowy Owls  1, 2, 30, 50, 80 100! It was amazing to see them flying overhead, sitting near the road and dotting the distant landscape. It was like some reward route in Super Mario. 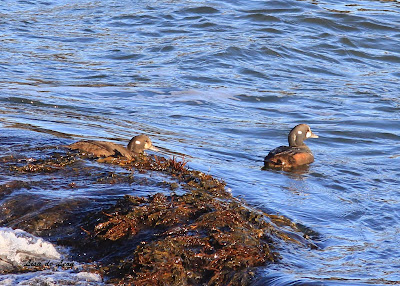 We saw Common Eider, Long-tailed Ducks and some other small birds in the distance. Interestingly enough, there were no loons to be seen nor Snow Buntings. We drove on to the Cape and had no luck with the Gyr. We scanned the skies both near and far, nothing that slightly resembled the Gyrfalcon. On the return route though, we did see a very interesting little warbler (had to be a warbler). It darted out in front of us and back into the trees again not to be seen again. After a failed,real effort to relocate it, we headed to Cripple Cove. 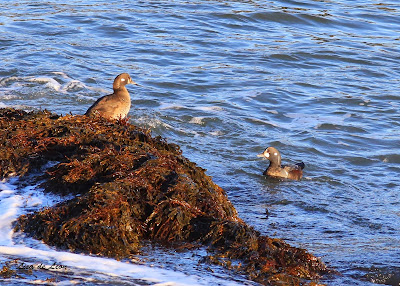 We got out and began to scan the waters in different directions. Shortly thereafter, Catherine started to jump up and down. I thought she had the Gyrfalcon, I rushed over. By that time she could speak and said "Har-le-quin" on each jump. She knew I had been hoping to see one and was so happy to have found it for me. Well, it turned out the brown lump wasn't one, but two Harlequin Ducks. A beautiful male and female were riding the waves rolling in on their rock. Unlike the Long-tail Duck or the eiders that swam off at the sight of us, these two seemed quite comfortable to stay. 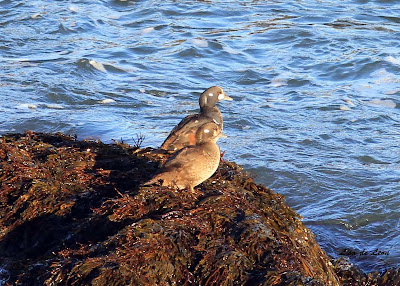 What a treat! These two lovely birds really made our day. Now, that seems odd to say after having just seen 100 Snowy Owls, but we expected them. We did not expect to see this handsome pair. What a terrific day! Thanks Catherine!
Posted by Lisa de Leon at 2:06 PM